Having taken off at 11 am and flown for 9 hours, it was now, obviously, 11 am. The day had nearly run its course, yet it was still morning. Welcome to the exciting world of jetlag.

The second language of Seattle-Tacoma Airport for signs and announcements is Japanese. (That is except for a couple of signs where Spanish was the second language.) It seemed an odd choice, but I'm sure there is a good reason for it.

We drove through the industrial part of town in a taxi that reminded me of the death traps that used to patrol the streets of Beijing. In fact when Cath got out, she nearly brought a bit of the interior with her.

We checked into our luxurious waterfront hotel with its four-poster beds made out of tree trunks, balconies over the bay and TVs the size of cinema screens. 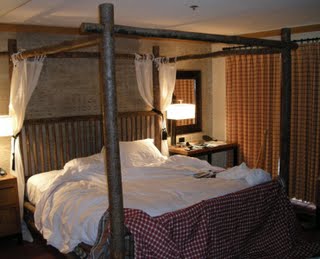 In Seattle there are fish motifs on everything including most hotel pillows; and you are never more than a few hundred yards from the nearest totem pole. But the real motif for this hotel was the bear. Bears sat on the pillows waiting for you to hug them, bears leant against columns on the reception desk, bear footrests stood proudly in the room. Not a place to be ursophobic. I hear that they get a lot of large, bearded gay men in the bar too, but it could just be a rumour.

We had lunch at a fast-food middle-eastern place in one of the mazes adjoining Pike Place and followed it up with iced tea in a crumpet shop. We were too full to try the crumpets, although they looked authentic and hand-made. 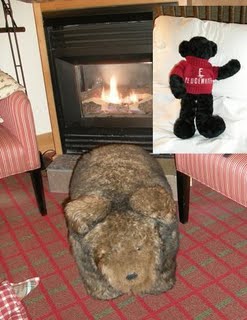 There seem to be a lot of runners in this town. We watched a couple jog up the steep hills. And then noticed a few heavier people struggling up the same hills. It seemed to contradict Cath's theory that larger people should be healthier as are used to carrying more weight around.

Back at the hotel, we napped and enjoyed the cooing gulls that nested in hotel crevices.

After registering early for the conference so that Catherine could collect her free rucksack, we had dinner at the hotel's restaurant. It's a five-dollar place. That is in any guide it will have five dollar signs next to it. It was what is still called nouvelle cuisine, despite it being as old as I am. I ordered the ribs as I was feeling hungry, and a plate arrived with two of them. Two ribs! Tasty and attractively complimented, but a rack it was not. If that was a rack, Kate Moss has a rack.

That night, as the door proclaimed "No Moleste" to the world, we slept on Catherine's observation that we seemed to be only two people in town without tattoos.
Posted by Peter More at 12:10
Email ThisBlogThis!Share to TwitterShare to FacebookShare to Pinterest
Labels: Anthropology, Food, Language, Travel, US, Wildlife

Is that a bear-shaped ottoman in the picture? It's fabulous! :-D

It's a bear-shaped footstool.