We woke up early and were treated to oatmeal. Yes treated. It was great. You know when you're getting old when your body starts craving healthy things. After that, we skipped out early for a long sojourn in Powell's bookshop The car park for Powell's is an adventure in itself. A steep, single-lane ramp for traffic arrives at the top to a sudden curve. Signs warn you to flash your lights and honk your horn before you get to the curve. Failure to do so could result in a nasty little crash right at the top of said steep curve. Dents and scratches along the wall testify to some badly-judged turns.

The area we passed through before had once been warehouses. But as with cities the world over, the former warehouse and dock districts – once the busiest areas, then later the most run-down and undesirable – have been revamped and turned into high-class dwellings and fancy restaurants. The unliveable becomes the most desirable. 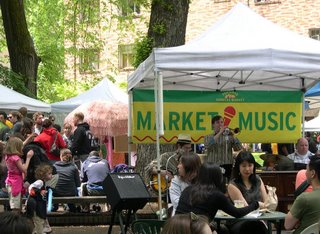 We wandered for a while around the farmer's market: an area of crafts and healthy-eating stalls. And many had samples, and it's very easy to shamelessly pick bits from each stall, as long as you look like you might buy, and especially, as in our case, you do actually buy some things once in a while.

The area round the market was filled with churches. Now this isn't a revelation for a country that is pretty much filled with churches. But what was interesting was the variety. Not just in building design but in denomination. There were a few new churches oddly in the style of the older European churches. Some religions like bold and brash buildings, some prefer modest. The Korean Christian Church was a lot bigger than I would have thought such a church would need to be, and a lot more European in design than I would have expected. The 'Old Church' was of the old American wooden design. "Old" meaning dating from 1882. As Catherine pointed out, in Europe, this would be called the New Church.

Because it is important to be visible in a land of advertising, Americans often come up with some great names for shops and businesses, as well as coming up with some terrible puns. The doggy day-care centre called Virginia Woof tends towards the former. 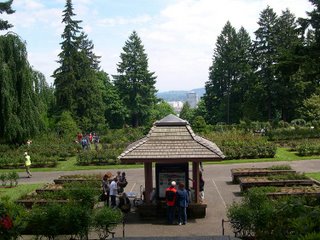 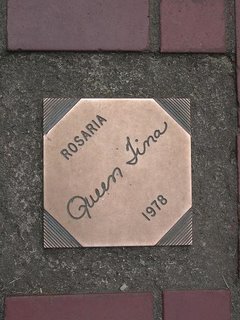 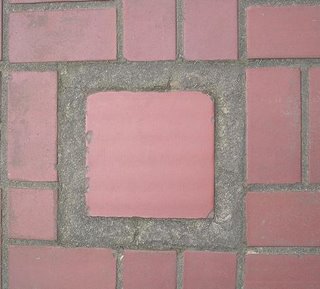 As promised, Patrick brought us to the Rose Garden, a peaceful, well-arranged collection of rose bushes and other shrubbery and treery. In there we found the plaques with the names of each year's Rose Queen, picked as part of the Rose Festival that was actually occurring in the city as we were speaking. The blank space in the photo is for 2007. We were assuming the girl for 2007 will be added after she stops being queen next week, and has not been omitted due to scandal. We rode the free shuttle bus up to the Japanese garden, saw it had an entrance fee and as we were getting through the afternoon at a rate of knots anyway, we simply rode the free shuttle bus back down again. 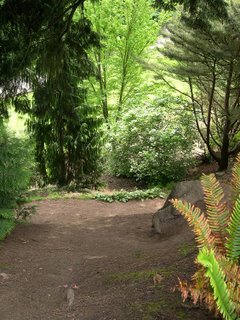 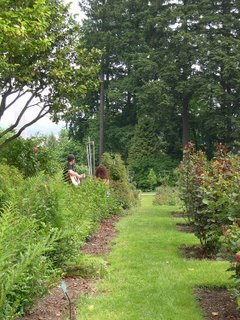 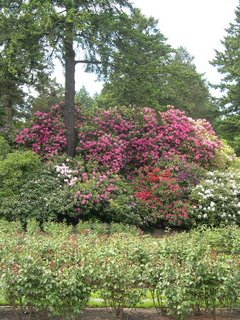 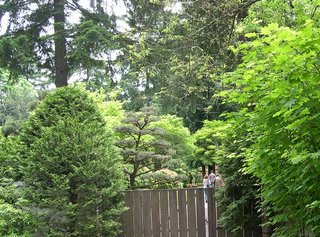 After popping in briefly on Joyce's mother (Joyce is Cath's cousin somehow in case you're wondering), we headed on for Multnomah Falls. It's a very impressive shoot of water that falls out over a sheer cliff, bounces off rocks on the way down to crash onto the pool and then over another fall (or autumn as its called in England). It falls 620 feet and is the second-tallest year-round waterfall in the US, they say. Because of a breeze there was a fine spray of water coming off the waterfall. Not unpleasant at all. A path snakes its way up the hillside to the top of the waterfall and beyond and is rather popular with walkers. On the way up, there is another waterfall, much, much smaller. In any other location, we would have stopped and marvelled at the beauty of this wonderful natural phenomenon. But placed here, it was just, well, whatever. 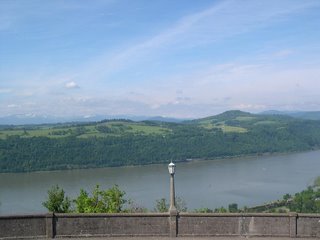 Around Portland is a mountainous landscape. Nearby is Mount Hood, with its large white peak, if I remember correctly, the only mountain to be within a US city limits. Also nearby is Mount Saint Helens, which noticeably has no peak. Older readers might remember that this came off in 1980, when it unexpectedly erupted killing 57 varieties of people. 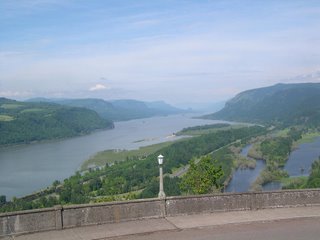 The Portland area is also full of Lewis and Clarke sites. Those of you who happened to read of our earlier trips to the US, will recall that at a couple of places there was talk of Messrs Lewis and Clarke, most notably Harpers Ferry. So no doubt you recall that these two plucky pioneers mapped out the fledgling United States by crossing it. Only recently have people bothered to point out that they didn't just do it alone, they had considerable help from real locals, most noticeably their guide: a young, heavily pregnant and later nursing girl. 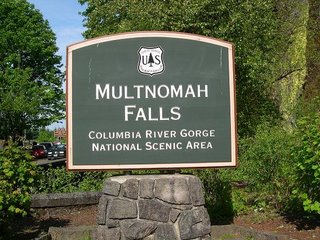 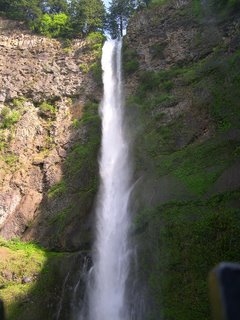 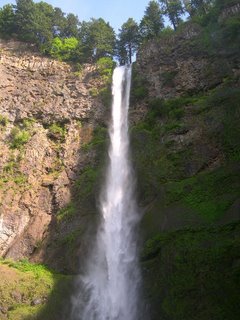 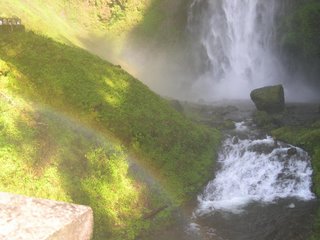 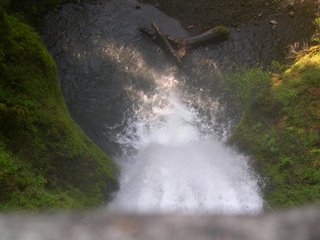 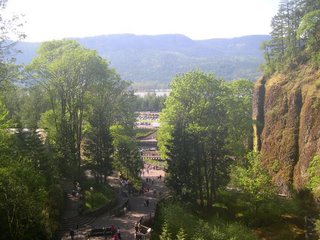 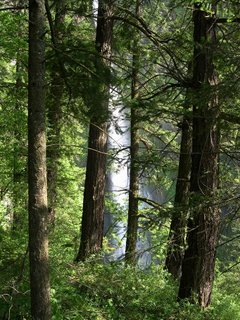 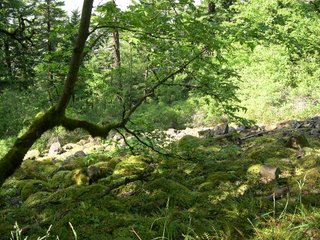 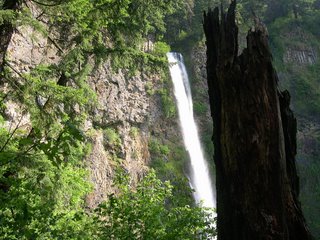 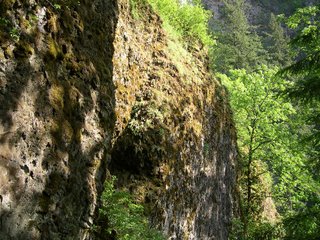 We got half way up to the top of the waterfall before we had to head back. We had a date with 18 teen princesses. That's right. Originally Catherine and I had planned to go and see an impro show. But when we arrived we found that it coincided with the big parade that was part of the famous Portland Rose Festival. Voted the best festival in the world, no less. Not sure who by and for what reason, but we didn't argue with this. Added to the fact that one of the 18 high-school girls elected as the Rose Princesses was a cousin of Catherine's meant the event was unmissable. 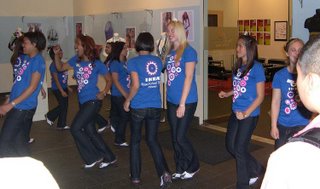 We were invited (as select members of the family) to a reception in the Art Institute. Because of expected crowds in the centre of town, we parked some way away in a mall and got the Max (tram) to the area we wanted. After exploring the area of the Art Museum, we headed over to the Art Institute. There 18 girls of an impressionable age were assembled with friends and family. The girls were dressed in identical jeans, Princess T-shirts supplied by Ikea and tiaras. Because the photos of the princesses had been displayed on the front page of the local newspaper which we had perused, the girls were already familiar to us in a way that made me want to go and ask for their autographs. After general mingling, the girls lined up to perform their ditty. This was a dance routine followed by a line-up in which they introduced themselves, gave us some information about their educational plans and then advertised some aspect of the Rose Festival. It really gave you a feel for their personalities and helped you speculate about which one would be chosen and inaugurated as the Rose Queen next week. As Cath pointed out, being stuck with 18 teen princesses in a swimwear exhibit was another thing to cross off my to-do list. 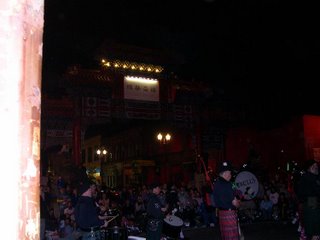 After the reception, we rushed over to have probably the quickest Thai meal in history. Then it was time for the parade. We had to at least wait for the princess float which we already knew was 87th. The streets were lined several people thick, but as many were sitting, we could still see pretty well. I had never seen a live high-school marching band before that time. I hope never to see one again. I have had my fill. It seems every third item was a marching band. One of which seemed to be the longest marching band ever. It had front and rear cheerleaders and side water-feeders. It went on and on playing the music all marching bands play: Louie Louie and Louie Louie. Actually they played something else, but it all sounds the same played by a marching band. 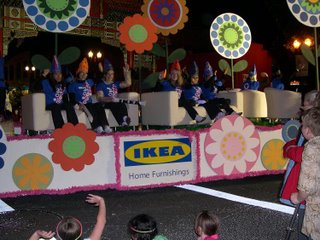 A vast improvement on the marching band concept is syncopated drumming. This is a marching band of drummers who play many drums interweaved creating highly complex rhythms. It's loud and boisterous.

Where we were standing was the first bend of the parade. It was a narrow 90 degree turn on a route lined with people. Some of the huge trucks filled with waving people looked like they would barely get round the corner without crushing a few forelyers, but they always made it admirably.

Heading back, the Max was maxed out, packed to the gills with people. Reports of fights breaking out on earlier trams came to us, but ours was relatively calm with the worst danger a student who was in danger of puking.
Posted by Peter More at 11:33
Email ThisBlogThis!Share to TwitterShare to FacebookShare to Pinterest
Labels: Anthropology, Books, Fashion, Food, History, Travel, US, Wildlife