We were picked up from the airport by Patrick, husband of Cath's cousin Joyce, in a (what is now no doubt a classic) 1980s Buick. He drove us to their house in the hills where we had a time to nap for a couple of hours. It's one of the best things you can do to stave off jet lag. A short, controlled nap. The latest scientific suggestion to avoid jetlag is fasting. Apparently starving yourself for 12-18 hours before you go means that when you eat your first meal, your body resets itself. It's an intriguing idea, and has an air of plausibility, but I am yet to be convinced. Although giving up airline food won't be a great hardship, giving up food for all that time would be. I still favour the nap method, even though this is rarely 100% successful. 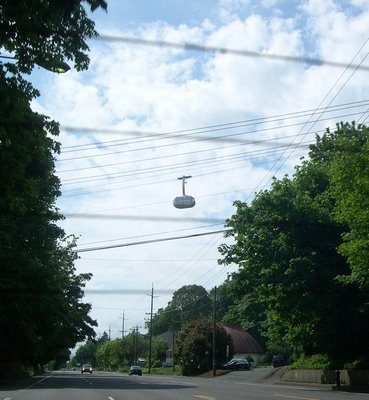 Once we were up, we went off with Patrick downtown. We arrived in a very student area and walked a few blocks to a very trendy area. We saw lots of people out in cafes and even one or two instances of posing. We also noticed many bowls of water left outside cafes to entice patrons with dogs. And dogs there certainly were plenty of.

We wondered around stopping briefly for an 'Italian soda' which was soda water mixed with the fruit concentrate I think is used in making ice cream. It was palatable and probably much less cancerous than coke or Sprite.

Portland is definitely Obama Town. With D-day round the corner, no one else seems to be in the race there. All of the posters, car stickers and signs were for Obama. People are openly reading his book in the street. (This was before Hilary Clinton gave up and even before the tide was overwhelmingly against her.)

Later that evening we popped into one of the big malls in the area and spent some time in Barnes and Noble, a chain of book cathedrals.

We ate a wonderfully hearty and healthy meal, conceived by a nutritionist and prepared by a wonderful cook (the same person incidentally). After that we headed to bed and slept like two sleep-starved logs.

This is a brochure that I found somewhere in Portland. It's pretty self-explanatory. It says, "If you're crazy, let us suck you into our cult." At least that's my interpretation. I like that they have trademarked SOUL TRAVEL and ECK. I doubt they'd manage to trademark ECK in Yorkshire where it is the second most popular word after BY.
Posted by Peter More at 22:57
Email ThisBlogThis!Share to TwitterShare to FacebookShare to Pinterest
Labels: Books, Drink, Food, Politics, Religion, Transport, Travel, US