Another night where we slept from something like 10pm to 5:30 am. This sort of thing is only possible for us through jetlag and living with people who keep similar hours naturally, of their own volition. It meant it was easy to catch an 8:30 train.

American train carriers assume that their passengers have never stepped on a train before. In fact some of their instructions suggest their passengers have ever even dressed themselves. They explained several times how to walk on a train, how to get on and off and even said things like "If it is not your stop, please do not get off the train." A lot of this was done by a man with an overly dramatic voice of the type usually reserved for security announcements. 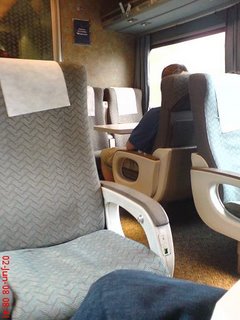 The train snaked its way through the countryside stopping at various places including the presumptuously-named Centralia. It's not quite clear what it as in the centre of. The bit the train station is in is a dump, but it can only be presumed a place with a name like Centralia has a nice bit. The train didn't stop at Kent, which looked nicer and had a much better name being where I was born and the name of the greatest Swedish band ever.

As is the common practice on so many forms of transport, headphones were available for those who were so bored they needed to watch the selected movie. The choices for these things tend towards family. It happens that watching these movies is actually improved by not having the sound as well. I watched and actively avoided the sound to something called Fools Gold with something called Mathew MacGonehew (?) in it.

After a few short hours, we arrived in Seattle and nabbed a taxi to our airport as we'd heard public transport in Seattle was not to be relied upon.

Seattle is the birthplace of Grunge. And Microsoft. Our hotel was far from Grunge, being a water-front 5-star hotel in which Catherine was attending a conference. I was being a conference husband. But also soaking up the information to be found there as a future employee of Catherine's growing empire. I think I'll be on the janitor and kitchen maintenance team, that way Catherine can force me to clean, tidy and wash dishes.

We dumped our bags and checked out the facilities. No trouser press, but an iron and board. We were offered a balcony and took it because you would wouldn't you. However we never once went out on it as (a) the weather was nearly always drizzly and (b) it was about the size of one chair, had we had a chair suitable to be taken out there. It would have felt cramped with both of us standing out there. 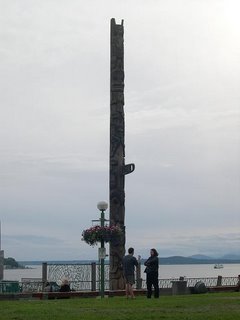 After this, we wandered around the famous Pike Market area. It's more grunge. It's a little bit hippy, a little bit earthy, and a little bit touristy. There are many craft stalls and stores. We checked out the belly dancing section in one. Catherine claims she would like to belly dance, if only she had a belly. It's also difficult as all of the outfits are made for women with chests that would be dangerous in a built-up area. We stopped in a popular poster and vintage magazine store. There were many posters from olden days, particularly wartime when it was fine to call the Japanese "Japs." There were posters from forgotten movies with titles something like "Revenge of the Creepies" and "They Returned From a Place Beyond the Known Frontier." There were also old magazines such as Life and Time from lives and times long since past. My favourite was a copy of Life with a picture of Rock Hudson in 1950s swimwear that stated "Hollywood's most handsome bachelor." You know I don't think he ever did marry.

Outside a small Starbucks a group of what appeared to be street people sang a spiritual a cappella style to much appreciation. It was very pleasing on the ears and made you think that maybe there is something in this old religion thing after all and that it's not true the Devil has the best music. 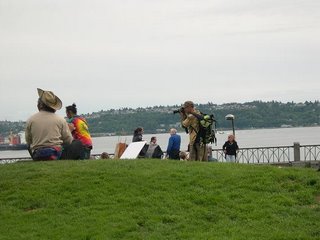 We had lunch in a middle-eastern café, so it told us, and had middle-eastern wraps, so they told us. American is the place to find the world's cuisine converted into wraps. After this we went luggage shopping for many, many hours. It was a long time to spend in a shop only to come away with a box on wheels. We followed this with a well deserved decaffeinated homochino. Well that's what I had. Catherine went back and looked in Macy's for more boxes on wheels.

Seattle features a lot of French restaurants. And more surprisingly, a lot of French written on the signs of such and similar shops. Perhaps because of their proximity to Canada. Or maybe Seattle was originally called Seattlé? (Ed: Actually Seattle was named after Chief Sealth a local, well, chief.)

That evening we took a taxi to a desolated area to the Vietnamese area. Saigon circa 1968 was less depressing than the particular area we arrived in. But around corners were several restaurants. We walked into one that intrigued us called the Tamarind Tree. It was a sort of nouveau Vietnamese mixed grill. The food was good, but more reinterpreted Vietnamese than the real deal we had been hoping for. But it was certainly busy and well designed if that's what you want from a restaurant.
Posted by Peter More at 11:36
Email ThisBlogThis!Share to TwitterShare to FacebookShare to Pinterest
Labels: Anthropology, Drink, Food, History, Movies, Transport, Travel, US

I found this entry because I wanted to see if the phrase "decent cup of coffee" and the word "Centralia" appeared in anything besides the Harvey Danger song "Moral Centralia." I was happily surprised to find that a few different websites have the combination.

I have a few corrections/enlightening points for you:
It's called Centralia because it's between Seattle and Portland. It's not so much presumptuous as geographically apt. The rest of the town is mostly light industrial (peppermint processing is a big deal in the area), residential, and outlet malls- that's the big draw for people, besides the state's oldest community college, but there's a nice downtown area, very close to the station, which has nice architecture and a few too many antique stores.

It's Pike Place, not "Pike Market." Calling it anything but Pike Place, and calling the Sound the Ocean, is pretty much the best way to look like a tourist. I can't understand why most people who talk about Pike Place don't know that's what it's called. I mean, the official name is longer (Pike Place Public Market) and technically only part of it is that, but the whole are is still referred to as Pike Place.

Anna,
I thank you for your comments, and always welcome being corrected / enlightened.

I concede that "Centralia" is not presumptuous but actually quite a humble name deferring to two larger cities around it.

I agree the Sound is not the Ocean, although I can't find where I referred to it as such. I'm more likely to have called it the river.

As for "Pike Place", I make no apologies for appearing like a tourist having only spent three days there, as a tourist. I can't say where I got the name Pike Market from, probably transcribing my barely-legible notes. With an official name of Pike Place Public Market, there's going to be many competing variants. I dare say Pike Place won locally, but I am from now on going to insist on calling it "Place Public" and see if the new colloquialism catches on. It'll be hard being in Europe, but maybe next year.