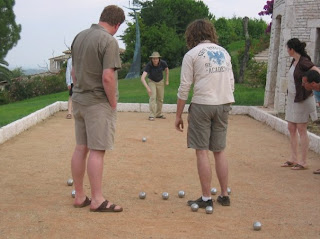 Having lived the French rural life for a good week or so, it was now time to sample the French millionaire lifestyle. This was several days of swimming in the pool, playing jou de boule, and being driven around in sports cars by rarely less than two women.

At night we played Werewolf as a pleaser of both children and adults. For those who don’t know Werewolf, it's a game where one or two people (unknown to the others) are werewolves and slowly pick off villagers one by one whilst villagers desperately burn each other at the stake trying to flush out the werewolves. It's a metaphor for politics, I believe. After this, I slept in a room that Sophie Marceau once lay naked in. Apparently.

The fourth day was Bastille Day; when the French celebrate the storming of the Bastille, an event which was a vital element in getting the French Revolution going. The Bastille, a notorious prison in Paris, very much represented state tyranny and so its storming has come to encapsulate and symbolise the liberation of the French people from oppression. Unfortunately the liberatees who represent the French people, in this case, were four forgers, two lunatics and an aristocratic pervert. The French are perfectly happy that these people are used to represent them; and not having seen any statistics, I couldn't say if this is or is not representational of French Society. 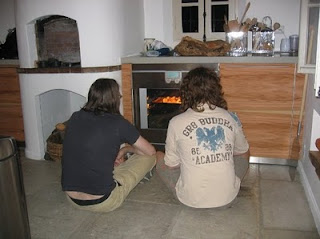 To celebrate this historic event, we went to the beach at Cannes. We went early to get a spot and swim. It was supercrazybusy. The whole of the south of France drove into Cannes that afternoon and were all picking out spots on the beach. Cannes is quite a long beach but soon you were lucky if you saw a patch of sand. There were thousands and thousands of people there. Possibly hundreds of thousands. And I was the whitest person there. I kid you not. I trudged up and down that beach trying to find people as or more ashen than I, but to no avail. This was a place for tanned bodies. There may well be pale people such as myself in Cannes, but they probably live in the sewer.

Bastille Day is traditionally celebrated with fireworks. Very much like the American 4th of July, a date that celebrates a similar event: when American citizens stormed Boston and rescued four barrels of Darjeeling, two of Oolong and a vat of Earl Grey. It seems freedom from oppression is frequently celebrated by a show of shock and awe.

At Cannes, where they have a few bob (i.e. they're rich), the magnificent firework display is accompanied by a lot of music broadcast from off shore. There were some real moments of awe with huge, well-choreographed explosions of gunpowder and glitter over the sea. The shock came mostly from fireworks that individuals and small groups were letting off on the beach. The French let off fireworks the way they drive. Like they want to die and take as many of les bâtards with them as possible.

Leaving Cannes was even slower than getting in because half of France was leaving it at exactly the same time. It took an hour and a half instead of about 20 minutes. 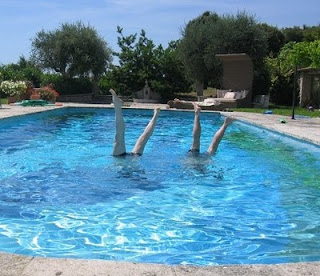 There are those who say U2 are a force for good. (Members of the band mainly.) But if proof was needed to the contrary, which is isn't, when it came time to leave, Bonio, The Side, Larry and Moe caused nothing but havoc. Two people missed flights thanks to their concert antics. I was dropped off super early to avoid the traffic from people leaving the scene of the crime. I believe this was actually called the Carbon Footprint Tour by the press. It certainly caused unnecessary trips and noise pollution. Many called it an egological disaster.

Again my flight was full of kids, but this time it affected me much less. Am I becoming immune? Maybe more tolerant? Or maybe a long holiday had relaxed me so much that even the combined horror of children and U2, could do nothing to destroy it. Peace out!
Posted by Peter More at 09:02
Email ThisBlogThis!Share to TwitterShare to FacebookShare to Pinterest
Labels: Children, Europe, Food, France, History, Music, Sport, Transport, Travel

Can I come with you next time??