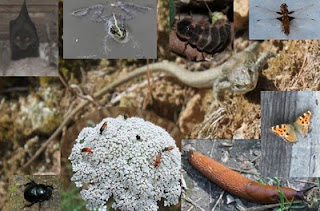 My parents' French abode is a densely populated area. In terms of wildlife, at least. People, however, are pretty scarce. But non-people creatures teem. Frogs, bats, sunflowers, sheep, bees, birds, corn, lizards, flies, butterflies, beetles, grasshoppers, slugs, snails, nettles. All flourish along with many others that are much better hidden.

And at night, things don't calm down. In fact, it gets relatively noisier. The frogs all get together and practice their close-harmony croaking; crickets chirp en masse; bats dart around like drugged-up crazy things; and occasionally an odd light emanates from a pile of rocks where a glow worm is glowing to the beat. Yep, nature likes to party. 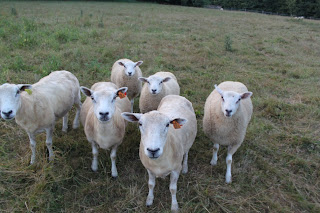 The bees were especially interesting, for a couple of days a friendly throng of interesting-looking specimens came by to gather nectar from poor unsuspecting flowers. They were not the sorts of bees I was used to and indeed were relatively new to the area, I heard. I spent ages trying to photograph them. I think I took 250 pictures of bees alone, most of which ended up being blurry, some semi-clear and one or two really good. I felt like a real wildlife photographer. Had I lived in a ditch for three days and covered myself in the local mud to blend in, rather than just grabbing the camera and walking over to the flower patch, I might have felt even more like one. 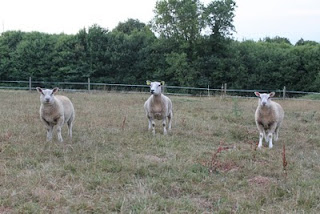 Because we had a new camera and are not so used to being surrounded by such an abundance of nature, I did go a little camera crazy. As well as 250 pictures of bees, there were about 300 pictures of sunflowers. It was the time of year where they stop being shy little heads and open up to be glorious flowers. I also took about a million pictures of everything else. I have 10 pictures of piles of logs, but I justify this as being very much part of French rural life. (Honestly, the local council allocates you a supply of logs.) 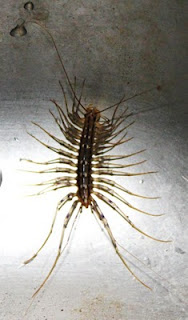 Even the house was not devoid of creatures. A loir (aka a Fat, Edible, Bug-Eyed, Squirrel-Tailed, Laid-Back Dormouse) was living in the roof judging by the nocturnal scurrying. And on the ceiling, the scariest centipede ever would hang out from time to time, occasionally taking time to drop into the sink and scare people. It was somehow alien in its design and would have made a perfect adversary in something from 1954. "It! The Thing from There!" I thought it was cute and as there seemed to be more than one, there was probably a happy little family up there. However, I also suspect that given a chance they would suck our brains out and take over the world. But you can't blame a creature for having ambition. 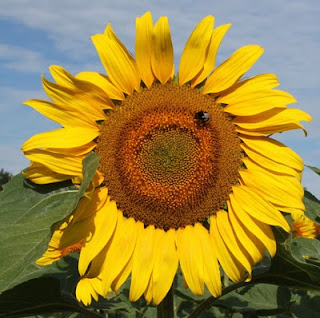 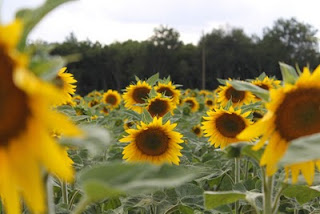 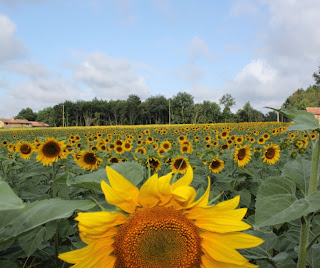