I was very much intrigued by Nigel Farage, a member of the isolationist UKIP party, on Have I Got News for You this week. Judging by the jokes that were being made about BBC having to appear fair and unbiased, that seemed to be the reason he was there. Although he does belong to a party that was designed to have jokes made about it. For the most part he played along with the digs at him, grinning clownishly, looking very much like Joe E Brown, the comedian who played Osgood Fielding III in Some Like It Hot. 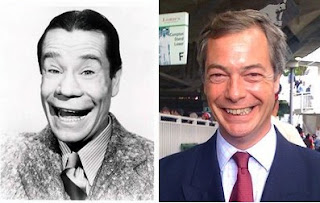 In fact he seemed quite affable except for one random outburst against illegal immigrants and a clip of his bizarre rant against Belgian MEP Herman Van Rompuy. In the latter he decries Van Rompuy because nobody knows who he is (presumable Mr Farage would have preferred Britney Spears to have spoken). He also regurgitates the xenophobic, school-yard stereotype that Belgium is boring and ignorable. An odd view for someone who stood at the Bromley & Chislehurst by-election.

The other interesting thing about him is he gets a little irritated that people pronounce his name incorrectly. Apparently it's not "Bucket" it's "Farage." Pronounced like the French, rhyming with the posh way of saying garage. It's not clear if he has French ancestry, although the name may have originated in the Middle East. I can however imagine Farage's ancestors at the French revolution shouting out "c'est pas la faute de l'aristocratie! C'est la faute des immegrants illégale!"

How will it all end? I can see Mr Farage escaping Europe back to Britain in a small boat with a mysterious woman who reveals she cannot become his (third) wife because she doesn't have the relevant papers to be in the UK. He shrugs, carries on piloting the boat, and utters the famous words, "Nobody's perfect."
Posted by Peter More at 09:11
Email ThisBlogThis!Share to TwitterShare to FacebookShare to Pinterest
Labels: Europe, History, Politics, TV, UK