No, we didn't start the trip by fighting Batman; we started it on a train. The train happened to go past a couple of companies that amused me. These were "Bam!" and "Gom!" Or to give them their full names: "BAM Utiliteitsbouw Regio Noordwest" and "Gom Specialistische Reiniging." I believe if you take the other route to the airport, you pass "Shazamm Internet Solutions" and "Kapowww Kippenboerderij." 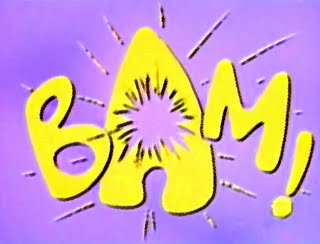 Having recently been to the US, I was very familiar with how it felt to be in the slow foreigners' line. This time, however, it was Catherine's turn to take this line whilst I took the quick one where some youngster pretends to not even look at your passport and wave you through.

Once through, however, I joined a combined line of confused foreigners and grumpy Brits to be sold train tickets by a very weary Italian. This was before we got our bags. Basically, there's a little kiosk that gives all the appearance of being convenient, but is then purposefully understaffed and decorated with confusing signs. The modern British railway system is no longer about getting U (designating you) from A to B; it's about getting ₤ from U to B (designating board members and shareholders). The more confused you are, the more money you throw at them.

Lunch was had with friends and family in a pub somewhere not too far from the airport. Somehow they were out of burgers and steak pies, which is pretty much everything in a pub like that.

After this, we were dropped off at the airport where we had to once again negotiate the confusing fare structure that privatisation has unnecessarily imposed on us poor train-travelling folk. There are three different tickets to get to London because there are three different carriers. (This is ignoring the class structure that doubles the number of tickets.) Train companies wish they were airlines and have real trouble accepting they are not. 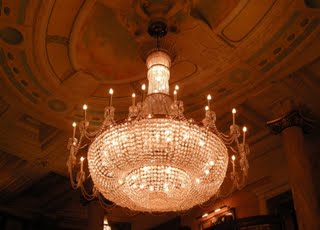 Our hotel was grand and prestigious. It sat in a cul-de-sac just around the corner from New Scotland Yard. It was run by Italians which meant the staff were handsome and stylishly dressed. Plus they had those accents where you couldn't completely be sure they weren't asking you to go to bed with them. It's always safer in these circumstances to assume they're not.

New Scotland Yard no longer looks like what it does in all those old cop series. Especially because it's hard to find an angle from where you can clearly see that rotating sign thing with all the security barricades. It makes it look like the Sweeney was set in simpler times.

After checking in, we made our way to the headquarters of Clarion where an old flatmate was working keeping Noddy in check. For those of you who didn't know, Noddy is back. Again. Noddy first disappeared in the 1980s. Nobody quite knows where but when he came back Mr Golly and all the other Gollies had disappeared. Nobody talks about this sinister aspect of Noddy's history. In fact it seems to be heralded as a good thing. 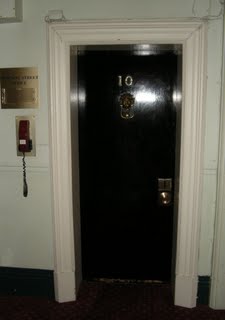 I finally got to see The London Paper which has come and gone during my time away from London. It was a free competitor to Metro and The Evening Standard but somehow far more downmarket than either. Yes, than either. It's gone now, and from what I saw, won't be missed.

As we came back to the hotel, the girl behind the desk bid us goodnight.

I turned quickly to Catherine, "Do you think she means..."