Our final day. We got up late and checked out, forswearing breakfast in the hotel to grab tea, coffee and croissants at a café in the historic town of Lalinde. The coffee they served restored my faith in that great drink after a few days of our hotel's urn-brewed mud. The café was a curious mix of old men and loud urban music. We guessed the old men were there for the great coffee and not because they enjoy run-of-the-mill r'n'b played too loud.

We stopped at an Intermarché to stock up on some of the local goodies we'd discovered this trip. Mostly walnut related.

Dordogne airport leads a double life, I imagine. During most of the week, it is a quiet little flying club for enthusiasts, playboys and would-be terrorists. But two days a week, the airport becomes bedlam as half a dozen planes from budget airlines land, refuel, repassenger and take off again. Ironically, the time in the air is probably the least stressful for the cabin crew of these flights.

it is a tiny and chaotic airport with a management style that seems to be of the "manage by panic" variety. Several new airports use this method. Procedures and order are deemed too expensive and instead the staff react to everything second by second.

We arrived, checked in and tarried in the departure "lounge" for 20 minutes before the powers-that-be told us to urgently hurry to the gate. There only seemed to be one gate, and this is shared several other flights. So that the playboys, hobbyists and terrorists don't get disrupted too much - and so that they only hire staff for as small a period as possible - all the flights arrive and leave at about the same time. Sure, they would spread the flights out a bit and make it more relaxing for everybody, but airports don't make money from relaxing and money can be especially tight when dealing with bargain-basement airlines who cut costs at every single level.

Having been hurried to the gate, we had to wait some more because the panic wasn't justified as the plane hadn't even landed yet. In fact, we watched it land.

Dordogne airport is like a miniaturised version of a holiday town. For most of the week, it's a sleepy little place, a collection of sheds and a runway. But once a week, 5 groups of British budget tourists (as well as a couple of Beneluxian) fly into town and skew the local economy. Temporary customs officers, security officers and so forth are hired or sequestered for a small few hours. And then suddenly it's a sleepy little flying club again.

Of course it's not luxurious. You are herded from one room to another and when the plane lands you are herded onto that. But if you fly for the cost it takes to transport a cow, you can't complain that you are treated like cattle. Actually, cattle get better treatment as it is required by law that they feed them.

Plus, crammed into an animal pen for an hour I could take; but forced into a cramped chair and made to listen to screaming kids for an hour, is entirely another matter. For some reason our flight was the perfect one for families with babies. Everyone seemed to have with them a screaming, little brat as if it was the latest fashion accessory. And the louder your brat screamed, the hipper you were. (I think it's called something like "baby bling" or "bawling".) 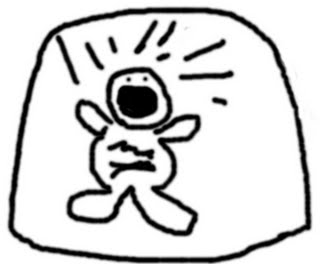 It lead me to invent my latest device for improved air travel. The Sound-Proof Baby Capsule™. You know those headphones that eliminate outside noise so you only hear silence? Well, my idea is like that only in reverse and contained in a bubble. The ankle-biter sits (or stands) inside said capsule where he can scream, shout, yell, cackle, burble, call, bawl and drool to his little heart's content; but the sound is eliminated so we can't hear it. The capsule can be clear so that the parents can see their kid and the kid can see them. And I guess there should be some optional air-inlet apparatus because babies don't understand that their screaming uses up more oxygen than just shutting up. Anyway, this invention is patent pending, plus we need to do some health and safety tests – I mean, people could trip over them.
Posted by Peter More at 14:36
Email ThisBlogThis!Share to TwitterShare to FacebookShare to Pinterest
Labels: Anthropology, Drink, Europe, Food, France, Transport, Travel