Because it was one of those classy hotels with foreign staff, we got a free newspaper. I don't remember which one, but as I remember being in a good mood, it was certainly not the Daily Malice. 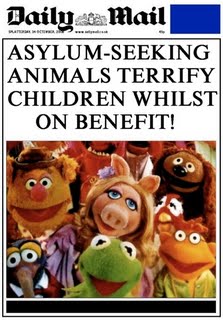 I must have been in a good mood as we went shopping. And to prove that even the Gods were smiling down on us that day, as we shopped, we encountered a small camp where some young, attractive things thrust Wii controllers in our hands and commanded that we play a few games of Wii Sports. Not only that, but, if our fumbling yielded the high score of the day, we would win a Wii of our own. And because Odin was very pleased with the shelves he'd made that day, we did get high scores. However, this was quite early morning, long before lunching kids came by and no doubt trampled all over our high scores. Tsk, kids today. Trashing their elders and betters' computer game scores. When I was a young'un... oh, yeah, I used to do the same.

We had lunch at "Eat," one of those mid-market sandwich chains. The mildly pretentious order of a name made me yearn for a bar called "Drink!" an escort service called "Girls!" and an Irish Brothel called, "Feck!"

Eat's wares were very good and reminded me how great the competition is for sandwiches in London. People don't think of the sandwich as a typical London food, but sandwich places probably outnumber all other types of eatery. I have no statistics to back up this claim, but this is a blog not an encyclopaedia. If you do demand information to back up what I say, I'll have you know all relevant data is available in the only source I know and trust, More's Uncyclopaedia. 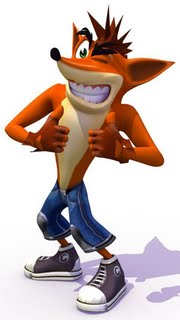 The area of our hotel is one where Japanese restaurants are locked in some kind of monumental battle. Each restaurant tries to out-psych the other by having a name that sounds most like a martial art. Nobu, Roka, Umu, Zuma. Actually, that makes no sense as, given my ignorance, most Japanese words sound like a martial art. Sushi. Teriyaki. Sake. Any one of these would beat me in a fight. I can see the proponents standing before me taking poses and naming them. "Raw Fish Roll." "Soy Sauce Cow." "Liquid Alcohol Rice."

The reason we were in London this weekend was for a wedding. Friends and former flatmates of mine were tying the knot after years of living in and around sin (and before that, East Acton). 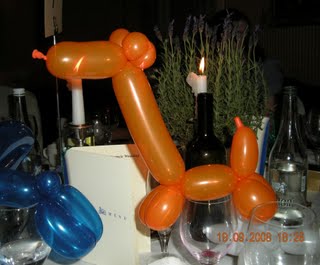 Many, many moons ago, myself and a young trekkie called Norm joined forces with a couple of lasses who we'd met through improv and moved in together. It is the stuff that makes sitcoms. It also makes dramas. And occasionally horror stories. This was something of all three made into a musical and directed by Richard Curtis and David Lynch. Well, amidst the clutter and fallings in and out, romance bloomed for two of the household. And I don't mean myself and Crash Bandicoot, although me and that guy... we shared some times.

The wedding, like all good weddings, was a chance to meet up with people you hadn't seen for millennia. In fact many of people at the wedding I knew, it was almost like wedding in my own family. 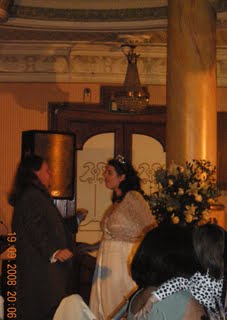 I'd met Norm through a guy called Dave who ran something not unlike facebook, but way before that. This was before the web. Possibly even before the internet. As I recall it, messages were carried by young street urchins for a shilling a packet. Well, Dave started one of the longest-running internet communities on a thing called Mono. It was one of the first places I let stuff I'd written leak out. The fact that the crazy people there liked it helped me form the belief I'm not bad at it and kept me from being the greatest IT consultant the world has ever seen.

Back at the wedding, there was great food, cake, antipodean balloon artists, many, many old friends and a band that played covers. (Although they played them a lot more faithfully than I like my covers. To me covers, should be ironic or played in a completely different style to the original. But then, I'm wrong on quite a few things.) Cath and I hung out with those who refused to leave until the band had to pack up and the inflatable dingos started deflating. 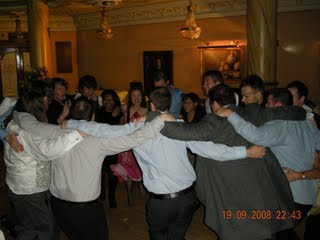 I have always pre booked my London airport taxi with Hummingbird Cars as they are licensed private hire London Airport Taxi company. They Provide Airport Taxi Service From and To London Heathrow Airport Terminal 1,2,3,4 and 5, London Gatwick Airport, London City Airport, Stansted Airport and Luton Airport ......I have used them on quiet a few occasions and they Reliable and Affordable. They have very well maintained cars and even the driver are very good.
http://www.hummingbirdcars.com