The usual breakfast maid must have been off today as the coffee was very weak indeed. Or they were expecting British people.

Apres le breakfast, we walked to the end of the hotel grounds and hopped over a disused gate onto a quiet country road. At the end of that, we recalculated and realised the forest we were heading for was further than anticipated, so decided to head up a narrow wooded path. But this soon began showing signs saying, "Private Property," or the French equivalent, and something about dogs. The signs were hand-written, which is always more ominous. After all, people who can afford fancy signs almost certainly have them there to keep you away from their nice stuff. Signs daubed on rough offcuts of wood seem to say, "please don't tempt me."

There was thick woodland all around us, but we found no paths in. The only one we did find ended in a small flat area of overgrown grass that was circled by bags on sticks. All very Projet De La Sorcière Blair.

We headed back along the country road. It took us to the outskirts of the village. At one point, we stopped off at one of those French cemeteries filled with concrete houses and ornate family tombs. In France, the dead often have better homes than many of the living. 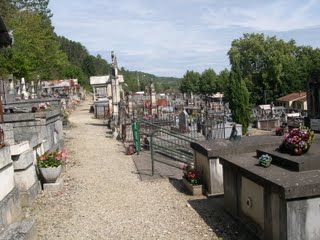 One of the great finds this trip was cabécou, a goat cheese that Catherine does very well with. She has problems with cow's milk and sometimes even milks from other dairy creatures. She's not tried aphid milk. Once we found the main part of the village, we hunted around for places to buy this cheese in order to bring it back home and feast on it for the limited period it would keep.

As well as an inordinate number of hairdressers, the town has a vast collection of immobiliers, or estate agents, or (if you are American) real estate agents. I like the suggestion in "immobiliers" that they actually try to stop you moving.

Back at the hotel, our room was being cleaned so we sat and ate chocolate, watching the stream and admiring the bamboo forest. We were somewhat surprised to see a bamboo forest in Europe. Our conclusion was that the owner misses the colonial days of Vietnam or is harbouring a strange and terrible beast from South East Asia. (Perhaps a Malaysian vampire, a Myanma mummy or a Kung Pao Panda.) 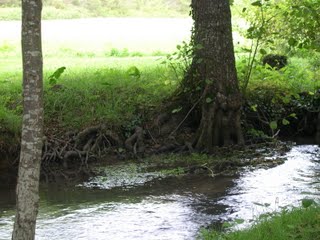 After taking showers (pictures withheld) we wandered back into town. We made some young lass's day by spending a small fortune on French glamour in her cute little boutique and in return she told us her aspirations and long-distance relations. We then wandered and settled down by the riverside to paint and write. The sun was out, as it had been most of the day, and the scene was very conducive to artistic pursuits.

However, as we walked back, the rain started to do its thing. I also realised I was a little sunburnt. I burn very easily. My skin has the sunscreen factor of tissue paper. It is made almost exclusively of photolopustre cells that go instantly from bright off-white to a scary shade of lobster.

For dinner we ate at a place we'd seen earlier whose name I don't seem to have written down. However, I noted what we consumed because it was sumptuous: duck gizzards, filet mignon, cabécou, caramel d'Espelette (which I believe were something like caramelised hash browns). For dessert we had pear in wine and a great fruit and sorbet. 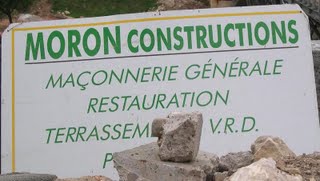 One of the key local fruits is the walnut. They use it to make cakes, oil and a great liqueur that we managed to have before pretty much every meal. If it had been available, we'd have had it at breakfast as well.

Wandering back past the Irish bar, we became fully aware of its lack of Irish credentials. The bar was open weekdays and nights, except Friday when it was only open during the day. Saywhatnow? An Irish bar that's not open Friday nights? Are they teetotallers? Is it a kosher thing? We were perplexed.

We walked back through the grounds of our hotel. One old stable had been converted into a games room and inside stood a fine table tennis table (where one could play table tennis tennis). The building was locked, although I'm sure we could have got the key. The trouble is it was so eerily dark and quiet in and around the almost certainly haunted stable, that we decided not to play. Instead we went skinny dipping at the old abandoned quarry. (That last bit wasn't true: we actually simply went to bed at the top of the old, old house.)
Posted by Peter More at 10:21
Email ThisBlogThis!Share to TwitterShare to FacebookShare to Pinterest
Labels: Anthropology, Drink, Europe, Food, France, Movies, Shopping, Sport, Travel, Wildlife