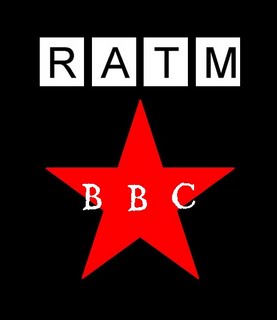 Am currently thoroughly amused by the BBC row about Rage Against the Machine singing their song live on the radio. Source: Guardian.

Without irony, they told the band not to say the "Fuck you" part of their famous refrain, "Fuck you, I won't do what you tell me!" Even if this is all you know about the band, that this is one of their lines, what do you think the band are going to do? They almost have no choice. To drop any part of the line seems to undermine its whole sentiment, and so really they either sing the whole fucking thing or they dump the it and cover The Carpenters.

Not that I wouldn't pay to hear Rage Against The Machine lay into a carpenters song. I always felt On Top of the World was a song about the injustice of a hierarchical religious structure that puts a single being above all others.

The reason people are talking about Rage Against The Machine again (not that they should have stopped, but they did) is because there is a campaign to make them number one for Christmas in the UK instead of some bland garbage oozed out by X-factor. (I haven't heard the song, but I stand by the words "bland," "garbage" and "oozed.") It's a way of saying "Fuck You" to Simon Cowell, which is to be applauded however it's done. There is also another movement afoot the have the Christmas number one be Tim Minchin's beautiful and sentimental (although self-justifyingly so) White Wine in the Sun.

My only fear is that those drones that really like X-factor will see these campaigns and be even more determined to buy the X-factor ooze and so make even more money for Simon Cowell and cause Joe McElderry's drug-addled death to happen all the sooner. And even if RATM (Rage Against The Machine) does make it to number one, we all know they probably won't be on the Christmas TOTP (Terror Over The Profanities), although we can be pretty sure we'll hear the X-factor single whether it tops or flops.
Posted by Peter More at 16:26
Email ThisBlogThis!Share to TwitterShare to FacebookShare to Pinterest
Labels: Christmas, Music, TV, UK