Today there were actually people at breakfast. It rather spoiled the feeling that we had the hotel to ourselves. But we didn't take it out on them. We just said "Bonjour" politely. There was an older French couple and a younger one with a baby that expressed a general dissatisfaction with everything. It seemed a bit too early in life to be disillusioned. Give it a chance, baby. It even disapproved of the Brahms. 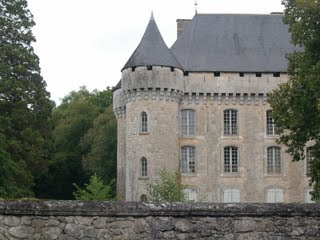 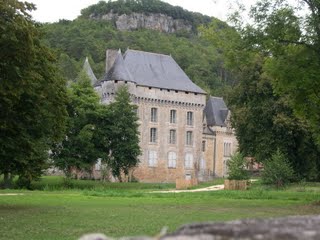 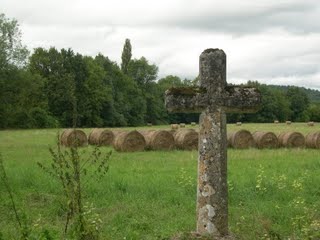 After breakfast, we drove to Campagne, a cute, little village with a church and castle and very little else. Then we went to have a look at the castle and village perched on the hill at Castelnaud, but the streets were filled with the staggering, undead hoardes of Vaykatiun, so we drove on. We passed by the PREHISTO Parc, which is something like an outdoor Cro Magnon Madame Tussauds (or Madam Ugg). We didn't stop, figuring it would be full of the modern world's Neanderthals, children. Instead we paid a wee visit to Sarlat, a medieval tourist town to buy shoes and bad chocolatines (or pains aux chocolates). 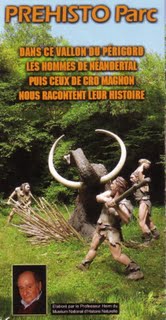 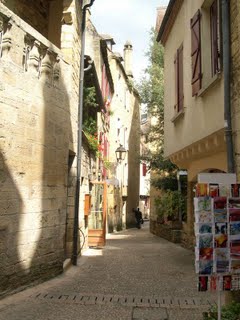 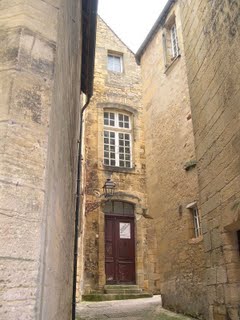 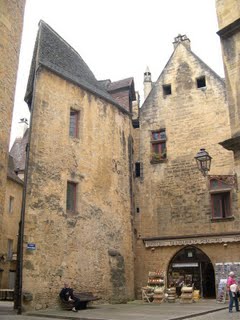 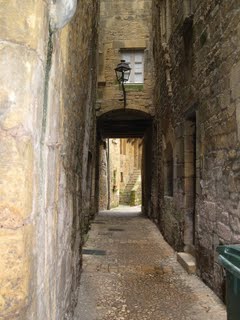 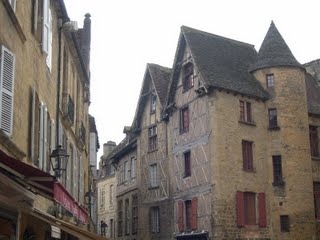 A very common thing on the menu in this area is Foie Gras. The word "Foie Gras" is derived from people trying to say "Fat Goose" with a mouth stuffed full of food. Foie Gras as you may know is the somewhat controversial liver of an overfed goose.

Après la, went we to Lascaux. This was somewhere well known to Cath, who has studied some art. It's the site of some of the best-known cave paintings (or peintures des caverns (I should really stop guessing at French translations)). The name didn't ring much of a bell to me, but the pictures were familiar. Cath was genuinely excited as she never thought she'd get to see them. Not that she actually ever did, because the originals started to decay some time ago and so the whole cave was recreated as accurately as possible in another cave next door. It's incredibly realistic, recreated using the old methods and materials. They had to keep reminding us this wasn't the real thing. 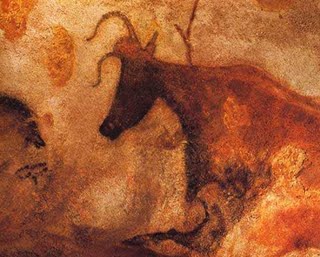 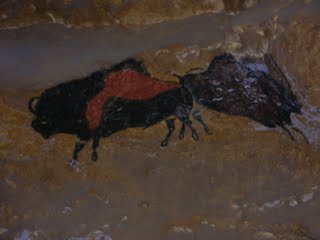 Since the discovery of the original cave in 1940, and the opening to the public in 1963, a little community of Lascaux cave-related exhibitions have sprung up. As well as the original cave (now closed to non-scientific humans), there is the recreation (Lascaux II), an interesting exhibit about how it was all done with possible interpretations of meanings and purposes of the pictures (Lascaux Révélé (a word which is clearly suffering from "acute overload")) and Le Thot. The latter we didn't make it to, but is the now-obligatory Madam Ugg-style museum with animatronic early humans doing all those things that people in that area would have done 17,000 years ago. Hunting, cooking, making animal-skin clothes, painting, and discussing the essential pointlessness of existence in between bouts of lovemaking. (They were still French after all.)

We drove back below La Maison Forte de Reignac. Basically it's a huge house hewn out of the side of a cliff. We didn't have time to go in, so drove under. But we suspected the most impressive thing about this was the view of it from the outside. Although apparently it is also impressive inside. 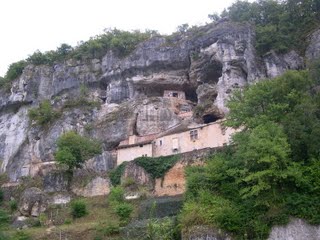 On our way home, we passed des châteaux, several fat goose farms, and drove through the pretty, pre-history-filled village Eyzies which seems to be hiding beneath an outcrop of rock.

We ate at the Restaurant next to the hotel. It was more expensive but not as good as the meal night before. My hard-to-read notes seem to say we had asparagus, foie gras and toad. I know what you’re thinking. "Asparagus, yuck."
Posted by Peter More at 18:04
Email ThisBlogThis!Share to TwitterShare to FacebookShare to Pinterest
Labels: Anthropology, Europe, Food, France, History, Language, Travel