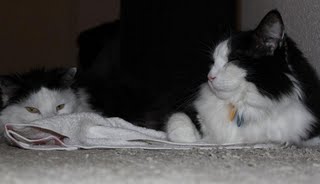 As many of you know, Professor Gray and I live with two creatures of the genus Felis catus. The functions of these creatures are to act as a crude alarm clock, to cover everything in the house with a thin layer of hair and for scientific observation.

Cath and I both have very different disciplines. I am in charge of noting the negative characteristics of the subjects: such as, the frequency and irritation of pitch of their whining; their tendency to believe they are ankle bracelets; and their inability to learn practical lessons from many of their escapades. Professor Gray is in charge of exaggerating their learning and cognitive skills.

Even before our chubby little subjects went on their diets, the overriding concern in their lives was food. Whilst this is true of many animals who, in the wild, don't know where their next meal is coming from, for animals that have never known the wild, rarely go out and are fed pretty damn regularly, this should not be a worry. Yet, Borneo (the male subject) spends his entire waking life whining that he doesn't have food in his bowl. Obviously he does have food in his bowl quite frequently, but it's only ever there for a few seconds before he wolfs it down. This brief period does at least afford the briefest gap in his whining. Borneo has an eating problem. 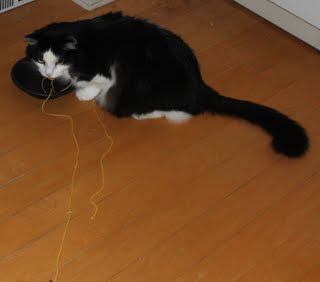 One of other joys in a cat's life is the stalking, wrestling and torturing of such prey as twine, thread and lengths of string. This of course is also related to food. In the wild, these bits of string would be mice, birds and adorable, little baby rabbits with big eyes and a delightful curiosity. But even cats know that the nutritional value of a bit of string is somewhat below wood shavings and hair (although Borneo does eat a lot of the latter). However the process is so closely linked with the getting of food, even for a cat that has never caught anything bigger than a moth in is life, that once the string has been caught, very often Borneo will drag it down to the kitchen and drop it in his bowl. Because all he knows about food is that this is where it appears.

Professor Gray has hypothesised that this shows rudimentary understanding of currency. Which I guess could be true. But it's more likely he's either treating this as a gift (more able cats often give their owners gifts of disembowelled mice or the badly-chewed heads of adorable, little baby rabbits with big eyes and a delightful curiosity); or that he is using some rudimentary logic along the lines of:

It's possible that some dropping of caught string in the bowl has been seemingly rewarded with real food, which may have reinforced this behaviour. 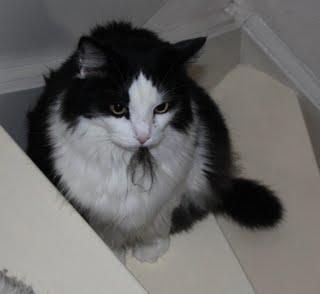 However with true scientific rigour, we do need to prove or disprove the currency theory. Therefore I am creating a whole system of different-length strings that equate to different amounts of food, along with an exchange rate (linked to stock market prices) between the string and other currencies (little squashy balls, catnip mice and shoe laces). So the cat will be paid unemployment benefit of three balls a week and an obesity allowance of one catnip mouse, plus whatever string he's able to hunt, as long as it's under the string-hunting quota of 15 pieces of string a week. Once he's got the hang of this, we'll starting introducing hunting levies and taxation, plus we may have to investigate possible unemployment benefit fraud as hunting could be considered an occupation. Once he has mastered these complications, it's time to make him CEO (or perhaps Main Executive Operating Worker) of his own corporation and see how long it lasts. Although the problem I foresee is that his first role as CEO will almost certainly be to reward himself a huge food bonus.

Who said cats were stupid? Oh, yeah, I did.
Posted by Peter More at 10:15
Email ThisBlogThis!Share to TwitterShare to FacebookShare to Pinterest
Labels: Cats, Science, Wildlife