At 22:05 on 23 April, David Dabekaussen passed away after an intense battle with leukaemia. He was 27. David was a shining light in the Dutch improv community; a member of the awesome Fluffy Suicide Bunnies. He was talented, creative and energetic; an accomplished musician (with the band Mr Moody); and a truly great improviser. It's hard to imagine him not being around.

When I picture him, I see him stand nobly in the Crea bar, his girlfriend Binky skating around him. Or I picture him at the end of the 2006 Amsterdam Improv Theatre festival, being showered in roses after deservedly winning the accolade of Maestro after a hard-fought competition.

He was very photogenic, and more than that he always manages to look very different in every photo you see of him. But in nearly all, there is the tell-tale cheeky grin. It is a testament to his spirit that he never seemed to lose his sense of humour no matter how the fight with the disease went. 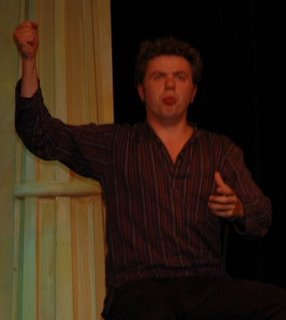 Naturally, this good humour inspired others, and his funeral last Tuesday was filled with much of it. Binky, now his wife of a few weeks, recalled some things that were typical David which made a whole room of hundreds of sad people burst into laughter. Karen, a fellow Fluffy Suicide Bunny, came later an delivered a speech to him filled with laughter and regret, showing characteristic Bunny humour. She recalled a recent argument about her giving up performing to spend more time studying, noting David's mock dismissive response and the saying "and now, at your funeral, I get the last word." Humour and sadness is a potent mix.

There were several other speeches and some moving music before it was time to follow the coffin down to the cemetery. It was not, of course, your ordinary coffin. Usually these things are highly polished dark wood looking more like granite than wood. David's was plane pine on which loved ones had written personal notes or pithy sayings. I realised this is exactly what a coffin should be. It should be personal and contain things that tie the dead to the living, and not be some impersonal slab of wood trying to resemble stone.

There being several hundred people, the road was soon clogged up as we left the church hall. The police soon arrived to first stop traffic and then redirect us. It was impressive and testament to a life that touched so many people. I find it hard to imagine some one meeting David and not enjoying the process. Even the weather was enchanted and the sun definitely walked with us.

At the grave, we crowded round as best we could. A poem written by a friend was read and we all filed past in ones and twos. We all dropped flowers into a hole barely big enough to contain them all and certainly not big enough to contain our loss. So even though it was the disease that won, it was still David who was once again being showered with flowers.

[Various tributes to David have been or are being staged. easylaughs is having a benefit on 16th of May to raise money for a leukaemia charity. Further reading: David's Blog.]
Posted by Peter More at 17:21
Email ThisBlogThis!Share to TwitterShare to FacebookShare to Pinterest
Labels: Anthropology, Impro, Music, Netherlands, Religion

Hi Peter,
What a beautiful piece you wrote about David and his funeral. I am on a holiday now in Egypt and Israel and with all this time on my hands and David's birhtday this coming Saturday, David is very alive in my head.
Lieselotte