What I have not reflected much on is that this was in many ways a Day of Horror. (den, den, derrrr.)

It all started with Catherine singing in the shower. Outside the door, it had an eerie, echoy quality just like the soundtrack of many a horror movie. Upon hearing the sound, my original idea had been to turn the camera on in movie mode and make (probably) the first ever Dogme95 horror movie. With the eerie music playing as we approach the door, then the door bursts open onto the mandatory shower scene and the most realistic screaming ever. I changed my mind when I realised that the resulting film would be less like psycho and end up being more like a Point-of-view porn snuff movie as a naked girl kicks to death the cameraman.

In the end, I settled for merely recording the eerie singing on my phone. This is where it got really spooky, as when I later played back the recording, I could hear nothing whatsoever of the singing. (den, den, derrrr.)

The underlying feeling of horror continued. It reached another peak with the swarm of flies at the tower. And later during our walk after our pancake, we reached a point where we could no longer hear the screaming kids. It was peaceful. That was until the dogs started. They were some way off, but it sounded like they were coming closer. Or was it the thing they were barking at that was getting closer? Neither, it seemed. We were spared. We were not left to be discovered as a pile of limbs in a symmetrical pattern not seen since the same day 50 years ago.

After that we thought we were safe, however when I looked back at the pictures I took the night before, I saw that we had in fact been visited by some terrible, terrible phantom. 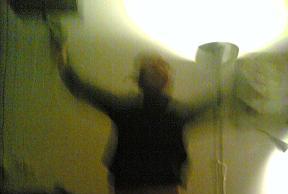