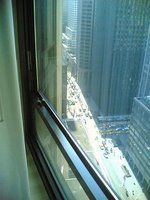 Sirens are all part of the backdrop of New York. Every few minutes there will be a wailing a few streets down. Sometimes they almost flow into each other to provide a constant soundtrack. It's like the twittering of the birds in the forest or the lowing of cattle on a farm. Sirens are the reassuring noises of the urban jungle. When you don't hear them, that's when you know they're going to raid your joint.

We are staying one night at the Hilton New York. Not because we are extravagant but because Cath was already there for a conference on Search Engine Marketing. In fact although the Hilton New York sounds like a posh retreat, it is in fact a huge slab of quality hotel furniture in a somewhat newish but aging building. And every little thing they can charge you for, they charge you for. Even looking after your bags after you have checked out. In many ways, the Hilton New York is like Paris Hilton: tall, thin, expensive but not nearly as classy as you would have expected given the name.

Whilst Lady Catherine was at her final day of conference, soaking up the latest Google wizardry, I wandered around the city. Actually, at first I stayed in and mulled over some writings until the maid burst in made me realise I should probably head out. Well actually I realised this after she had burst in and then later bashed the door (or nearby wall) a few times. Plus who wants to stay in an overpriced bed when one of the most vibrant cities awaits your sardonic gaze?

Round the corner from the hotel is the well-renowned Carnegie Hall. Well-renowned mainly because of the joke. You know the one, "Q: How do you get to Carnegie Hall? A: Turn left out of the Hilton New York, left again then right onto the next street." It's not very funny, but it's accurate. It's almost as groan-making as the other Carnegie Hall joke. "Q: Where in The Netherlands can you get all of the materials necessary to make a full-size replica of Carnegie Hall? A: Praxis."

I had been expecting much more of Carnegie Hall given its renown. You know, the mock-Greek columns and pseudo-Roman busts beloved by American architects. But in fact it's just a regular old-school theatre. Or theater as they mispronounce it there.

On the way, it appeared to be letting-out time at the local police precinct. Dozens and dozens of police cars came lugging along the street, not seemingly going anywhere in particular, but using their sirens to get across junctions when the lights didn't agree with them. But on the bits in between, they didn't speed. It was more like they were cruising. A bunch of guys showing off their flashy motors. 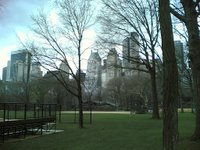 For the next few hours, I wandered around the large greenish patch in the centre of town known as Central Park. The park is heavily populated with squirrels and film crews. Of the latter, I encountered three, although I suspect one of these sightings was an earlier one that had moved. The first one was filming a guy playing jazz on a saxophone whilst a boulder with a pair of legs danced beside him.

Possibly the most frequently encountered inhabitant of Central Park is the common New York park bench (Sedes Novus Amsterdamus). These are thousands of them; lining the paths, hiding near the bushes or gazing wistfully across the pools of water. There are easily more than enough for one per squirrel with enough left over for one for each member of each film crew. The reason there are so many is that they are sponsored. They can be bought as presents, memorials and even as a means to propose, all of which is indicated on a nice little plaque.

(Thanks to modern photography techniques, you can download this picture and add your own text to the plaque.)

The obese section of the population of the US, the ones who come to Europe and complain that the MacDonald's next to their hotel is not a drive-through, do not seem to live in New York. Here people seem regular sized. Judging by the labels on things here, people are concerned about their health. Their looks too. I even saw a tramp in the park combing his hair quite conscientiously.

Once my phone battery had given up the ghost, I was without a timepiece. It was now I realised that there are no clocks in this city. Odd in a city famous for people rushing around with places to be. Fortunately (or consequently) most people wear watches and asking the time is an accepted, even necessary, social interruption. In fact another tramp asked me soon after for the time. Wow, even the hobos in New York have places to go, people to see.

I took myself off to the city in search of cwarfee, the mysterious drink so beloved by these islanders. I popped into a temple of the astronomical deer (Starbucks) where I partook of a "grande" (or huge) beverage and listened to accents.
Posted by Peter More at 20:32
Email ThisBlogThis!Share to TwitterShare to FacebookShare to Pinterest
Labels: Drink, Netherlands, Travel