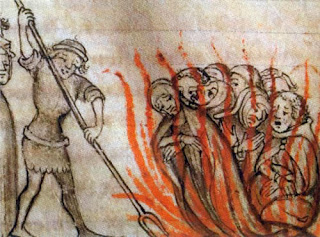 This is an old joke but it sums up something about inter-religious intolerance. In that it's often directed to those who are more like you than those who are very unlike you. But in fact this phenomenon goes far beyond religion. You see it in politics, somewhat. And you definitely see it in regional prejudices. The people that are hated in one country are not usually the people from the other side of the world, but usually the people in the country next door. And the reason for that hatred can often be traced back to an historical point of disagreement. It's quite common for people that once were united as one country to now hate each other's guts. Or at least be the butt of each other's jokes.

The other key source of religious disputesis the one the joke reather nicely exposes. Some age-old decision about the interpretation of some vague or ill-translated statement. Again this is echoed in politics, as can be enjoyed any time Americans 'debate' whether they should arm themselves to the teeth or not.

I've always felt that politics and religion are not so very far from each other. They deal with very different parts of our lives, but they are both attract a similar range of fanaticism and a similar range of (un)willingness to listen to the other side.

It's the sort of thing that can be a bit despairing were there not jokes like these to help put things in perspective and realise you are not alone in thinking about despairing because someone must have written that joke.
Posted by Peter More at 00:36
Email ThisBlogThis!Share to TwitterShare to FacebookShare to Pinterest
Labels: Anthropology, Comedy, History, Politics, Religion