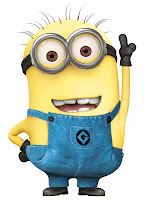 The plane for the London to Dallas leg of the trip was a super-modern Boeing 777. Even in coach class they have power outlets, high-quality screens and a large selection of movies, TV shows and games. There’s even wifi if you want to pay for it.

I slept for a bit (to supplement the 1 hour I got the night before) and then watched some stuff. And because everything I do is just to have an excuse to blog, here’s tiny reviews of all of it.

I got to finally see Despicable Me (2010), which is an enjoyable take on the supervillain theme with the most adorable henchmen ever. Definitely aimed at pleasing kids but also at entertaining adults. It pleased and entertained me enough to forgive the schmaltziness. Kids love schmaltziness, I guess.

I also started and unexpectedly finished This Is The End (2013) which is like an updated version of those Hollywood Party movies they used to make in the 30s and 40s. In it a bunch of actors, all playing grotesque (probably) versions of themselves get caught up in the end of the world and . It’s a tongue-in-cheek light-hearted horror, and is pretty well done nonsense which . I’d probably enjoy it a lot more if I really knew much about the actors in it. I’m so old fashioned I’m better off watching Hollywood Party At The End (1933).

I also watched some of the TV show The Mindy Project as I’ve been curious for a while, enjoying the eponymous creator very much. However I was disappointed, finding was trying a bit too hard and ending up a very standard sitcom. But one episode of a sitcom is not normally enough to form a proper judgement. But who has time for more these days?

Then I caught an episode of Big Bang Theory. I’ve not seen it for a while, and so wondered how it was faring. Sitcoms, if allowed to go on too long, have a tendency to become soap operas (or tragic parodies of themselves as with Happy Days, although Happy Days actually started out as a tragic parody of itself, so that’s a bad example). Friends definitely became a soap opera, and Big Bang Theory has already started that transformation. I guess it’s only natural. In human life, the 20s for many people is a sitcom, but by the 30s the sitcom has usually become a comedy drama, soap opera or outright drama.

The 20s for other people can be Intense Drama, Action Adventure or Monty Python Fan Sketch Recreation Show. I’m sure this isn’t the complete list.

I also managed to catch up with a show I’ve managed to avoid (not deliberately) for a number of years, Dr Who. Dr Who is an eccentric, time-travelling problem solver. The problem is almost always alien-induced. The genre I would put as campy kids science fiction comedy drama (or sci fi pantomime). At least the comedy episodes are like that. As a kid it was the show that scared me the most. I think it would still be as the often ridiculous monsters are accompanied by genuinely scary music.

The innovation that Dr Who brought to TV shows that allows it to be one of the longest running shows ever, is that every now and again, when ratings, contract issues or simply the need for change require(s) it, the Doctor undergoes a regeneration (or recasting) where he transforms from one quirky Englishman to another. Dr Who is a Time Lord, which is somewhat below a Time Earl but above a Time Baronet. He travels all over the galaxy, but mostly England and planets that resemble the English countryside. I’m very gladdened that it has an increasing following in the US now - I saw plenty of toys in the toy stores, met a few fans and even found a poster for an improvised Dr Who show. I look forward to the remake with any of the cast of This Is The End with total nonchalance. 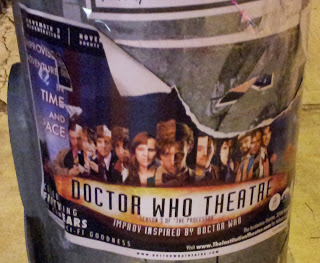