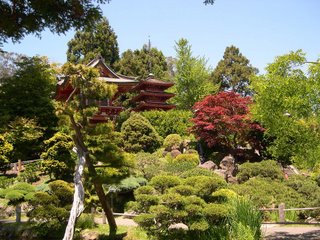 Following yesterday's Japanese Tea Garden disappointment, we decided to take no chances. Once we had dispensed with breakfast, we headed that way on the number 71 bus. The Japanese Tea Garden is an island of peace and serenity and expensive tea in the middle of a moderately relaxed city by US standards. It's only spoilt by occasional throngs of tourists of all nationalities. And the tea isn't really that expensive given the peaceful surroundings and the great snacks you get with it. There is even some tamelife (it can't be called wildlife when it's so placid) including fat koi, some happy crayfish (or crawfish, or crawdaddies if you're Texan), a myriad of pond skaters and even an oddly marked bumble bee that could only walk. What was great to learn was that in the Eastern European language of the two very Boratian gentlemen with 4 English-speaking kids "crawfish" is the word for crawfish. Maybe it was originally an Uzbek, Kazik or Tjerkminik word in the first place, but I doubt it. 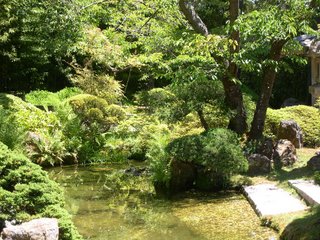 Cath and I spent many hours discussing the way of dealing with homelessness. There is a lot of it. Many places have different ways of dealing with it. Most with some success, but the problems seem to be a) not too much is done, and often it's not initiated by the city but individuals who may or may not be able to get city funds; and b) the policy in each area is quite rigid and often somewhat different. And the fact is different people are on the street for different reasons and the best method to help them out is not the same for each person. Variable measures is even more expensive than a fixed, one-size fits all solution. I think it fair to say we failed to come up with the perfect solution. 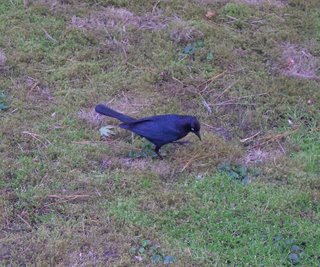 On the way out of the park, curiosity took hold and we looked in to see the Shakespeare Garden. Fortunately, a pair of elderly cyclists were being told all about it by one of the park-keepers. It's a recreation of an Elizabethan garden. What was even more interesting to learn was the fact that whole park (Japanese Tea, Shakespeare and other gardens) is "built" on sand. (If you look on the (Golden Gate) park on the map, it goes right up to the sea). It apparently requires almost constant watering for it to remain a park and not become a huge dune. 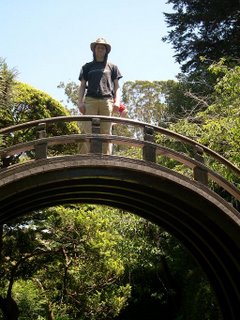 We caught the bus to Haight (pronounced, The Bus to Hate - a great title for a terrible 1950s drama; although not as good as the sign on the tram "Haight-Casto" or Hate Castro! - great title for terrible propaganda movie).

San Francisco prides itself on its coffee. It considers itself the real home of coffee in the US and that Seattle is just the pretender who just gave us a lot of chains. In a minimarket (grocery store a few blocks off Haight, there was a selection of 5 coffees in flasks. People on the go can squirt out any one of these into a beaker, pay and continue to go. Five types of coffee is more than most bars offer. We had our coffee (okay, my coffee) over the street in The Sacred Grounds Café < http://www.sacredgroundscafe.com/>, a suitably hippy sounding name for an established but still somewhat disorganised eatery. There was a Hillary Clinton poster in the window which was now just ironic since she was out of the race. (That is at least until her assassins get to Obama.) The food was great. I had a sandwich with some great Sudanese chicken thing and Cath had falafel. On another table (the only other filled one for most of the time) a woman talked with a loud penetrating voice about the peace of meditation. She might have been ironic too.

The bathroom proved to be an adventure. To do it properly, you walked through the kitchen and on your left was a door unclearly marked Toilet. However, go through the kitchen and turn right, ignoring the scruffy barely-marked door on the left, and you end up in a cavernous area that leads down many paths. Some to stairs, another to an exit and a another one to a toilet marked "For pizza patrons only." This was locked. And anyway, we were in a cafe, not a pizza restaurant. I followed the thread of my jeans back and found the entrance to the lair. I fancied I heard what could have been screams far off in the distance. Presumably from the pizza place. Back in the kitchen I asked where the bathroom was. It was immediately on the left out of the kitchen. I would have felt stupid had not a girl appeared in the kitchen for the same purpose I appeared there a few minutes earlier. I let her go first and she immediately turned right. It wasn't me. The door was invisible.

We took 2 buses to the Golden Gate Bridge. (That is we changed, rather than went on separate buses.) The Golden Gate Bridge was once the longest suspension bridge in the world, and it is certainly one of the most famous. It's mainly recognisable because 90% of suspension bridges all look the same. From the look-out point, just before you get on the bridge by foot, you can look down and see an historic army fort. It's not obviously reachable from there, although it is clearly reachable by many people.

We walked about 1/3 of the way across the bridge and back mainly to say we'd done that. We had been expecting it to sway in the reasonably strong winds, as some guide books had suggested, but it didn't. Sometime around Portland we'd been past the bridge that sometime in the 50s or 60s swayed so violently in the wind it fell down. It's one of those piece of footages you never forget. And so when we read that the Golden Gate Bridge can sway in the wind, this is the image we had. We were both relieved and disappointed. Even so, without the swaying it was still not a casual experience for someone who is scared of heights. 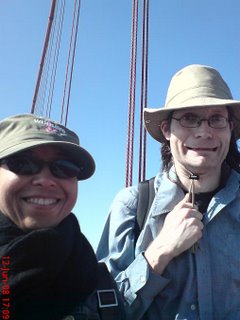 I wasn't scared a bit.

We then took two buses to the coast to go visit the Seal Rocks. These are rocks where seals are known to hang out. At that time they were all rock and no seal. I guess the seals don't work after 5 pm. They must go to their night home and eat their fish suppers. Mind you, they're probably sick of fish. 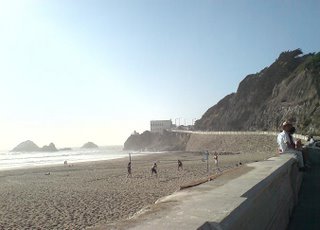 We took another bus back to our hotel and steeled ourselves for dealing with nwa - navigators with attitude. Airlines, once companies of apparent generosity, are becoming very miserly and grasping. We booked two seats at the same time and when we came to check in, we were allocated seats miles apart from each other at different ends of the plane. Most available seats were in the aisle, but were "premium" seats, i.e. you had to pay to sit there. So they give you unacceptable seats and then make you pay to sit with the people you booked the tickets with. It was just a cynical, penny-pinching way of grabbing more cash off you. A complaint has been made. 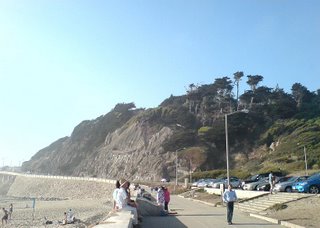 We had dinner in a Vietnamese/Chinese restaurant not far from the hotel. The best thing about it was the aquarium display of potential dishes in the front. Of all the creatures only a couple of the shrimp showed any enthusiasm and were trying hard to get out of their tank. 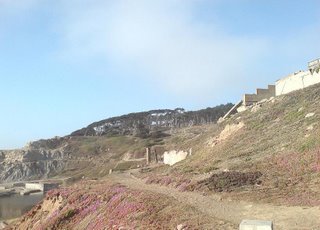 On the way back, we encountered a chatty woman who was begging. That is she was sitting by the side of the sidewalk talking to passers-by in a friendly and kindly way. We spoke for a bit until she brought up the subject of kids. She explained she had 5, and that they were the greatest thing that had happened to her, but due to some mistake she could no longer see them. She burst into tears and it was clear she preferred us to leave her be. There was a story there and we were both curious to know and to help if at all possible. She was well dressed, well-groomed, and had she been walking along we wouldn't have thought beggar except that her shoes had seen better days. Sitting on a blanket on a city street is all you need to say beggar, it seems. 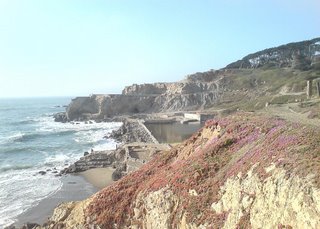 AAfter putting much thought into solving or alleviating the problem of homelessness, we came to few concrete conclusions, packed and went to bed. All we know is that there are people without any home and there are seals with two. 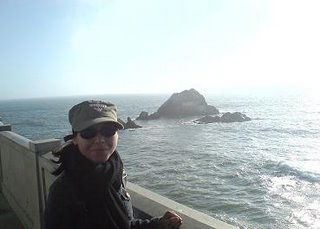