One thing that had been bothering us was the fact that every art shop, every bridge-side artist, every souvenir shop… all sell pictures, cups and sculptures of cats. Images of cats are every where in these shops, yet in the time we have been here, we have not seen a single one. How can the art establishment be so obsessed with an animal that is not there? There is a story there, we were sure. One clue was that many of them were in a particular style, with a crescent-shaped head. There was indeed a mystery afoot.

We climbed back up to the castle to check out one exhibit that sounded good. It was about alchemy, amongst other things. There was, however, no sign to it, but we found the building easily. The door was shut and unmarked, but was not locked. Inside, there was no mention of alchemy, the exhibit was announced as being about warfare. The box-office was closed, so we wandered by it and up the stairs to come to a glass door behind which several curator-type people were having a meeting. Probably about why the unsignposted exhibit was not doing well. Or to query the wisdom of turning the golden alchemy exhibit into a base-metal one about war.

On our way out of the castle, we noticed the history museum had closed too. Museums must be having a hard time. The toy museum seemed to be doing okay, though. We went back to the bridge via a different route than before and dropped in at the Kafka Museum Bookshop. The shop was bright and spacious, which seemed a little incongruous. Surely a dark, oppressive room would have been much more the thing. However the eagle-eyed, old woman in the corner eyeing everything you did was a nice touch. In went to buy a copy of The Castle, but there were at least three different translations into English alone and there seemed no choosing between them, nor reason to pay so much for such a book, so I left empty handed.

We stopped for coffee in the place next door and it turned out to be another in the Ebel chain. Here was the spot for a Café Metamorphosis or The Coffee Trial. The coffee was well earned as we hadn’t had any all day. After a huge bowl of latte the size of a soup, we crossed the Safe-Pocket Bridge and headed for the Jewish quarter.

It was Friday and getting dark so the functioning synagogues were busy with people celebrating the weekend. The main one had an armed bouncer on the door, and a few other heavy people hanging around the street. I recalled from the paper that there had been threats recently against Jewish targets from some terrorist faction.
Just down from the New-New Synagogue is the Old-New Synagogue. It’s a beautiful old building from the middle ages and looks more like a fort than a place of worship and has that haunted look. 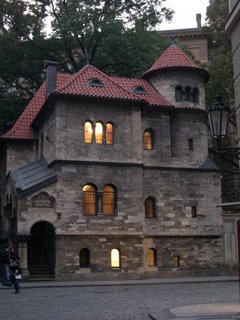 Old-New Synagogue or Home of the Munsterbergs.

We scurried around for a bit to try to find stamps before we discovered that post offices here stay open late. We’re used to post offices considering themselves banks and opening for a few hours a day just so no one squats there.

Dinner was at our previous first choice, the Newtown Brewery, thanks to us reserving a place or, rather, getting the receptionist at our apartments to reserve. When we arrived the place was empty downstairs but reasonably busy on the indoor ‘terrace.’ So we wondered if booking had really been necessary, but when we left the place was packed again.

The food was typical Czech fare as in the other bars we had eaten. Plenty of meat; bread and potato dumplings with everything; some nod to other vegetables in the guise of sauerkraut or similar. All the menus we have seen so far have had a weight indicating the amount of food (or meat) you get next to each dish. This is the best menu idea I have had in a long time. Really avoids those annoying times when you order two dishes and find you have food in front of you for the whole bar.

The beer was good, too. They brew their own there, as the name suggests, and both the light and dark were tasty if a little weaker than others beers we’d had.

The downside to the place is it is on the tourist chart. Busses of Germans arrived while we were eating. On the plus side, they have a live accordionist playing while you eat. I think this is a plus. They seemed to think so. However he didn’t come over to our area and we only heard him, not see him.

Before we came here, we only knew one Czech guy. He is called Frantičak and now lives in Hong Kong. To me the name Frantičak is rare and exotic. In the Czech Republic, most of the men are called Frantičak. The accordionist in Novometský Pivovar was no exception.

Eventually, because we were tourists and these sorts of things send out tourist homing signals, we found ourselves back at the Racist Clock Square and decided to celebrate the start of Shabbat with a beer or two there on one of the several heated terraces provided for that purpose. They seem to be provided for tourists as no Czech-speakers seem to use them. The reason is clear when the bill comes. Having spent a few days getting used to Czech beer prices, it was a shock to suddenly find yourself paying airport prices.

In Prague, the real criminals are not in the metro which seems very safe, they are not on street corners, they don’t even appear to be on the Charles Bridge where they’re supposed to be. No, my friends, in Prague the criminals are running terrace bars on the Old Town Square. 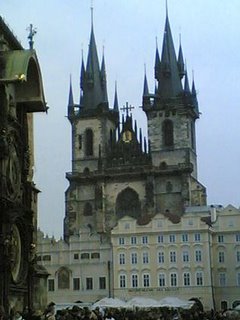 We finished our drinks, soaking in the rich tapestry of accents around us, and then had a final night time wander around the area. We even cleaned up one mystery. In one art/tourist shop we saw a bunch of artworks of multicoloured cats many with crescent heads all by one artist, one Rosina Wachtmeister. She is very famous for these cute sorts of cats but seems to have no connection with Prague other than artists here are obsessed with her work. There seems to be no story of cats being carted off. Now the only mystery is what’s the story behind the Church of St Paul at the Laundry.
Posted by Peter More at 18:57
Email ThisBlogThis!Share to TwitterShare to FacebookShare to Pinterest
Labels: Art, Books, Drink, Europe, Food, Travel