We had a long lie in to plan and recuperate, and to settle into our apartment. Eventually, we set off in search of the real Prague or at least an experience we could consider being real enough. We decided to follow one of the suggested walks in our borrowed guide from 7 years ago. I often get the feeling that Lonely Planet routes are written quite late in the day back at the hotel by stoned Australians.

We touristed in circles for a bit trying to keep to the route. After seeing some of the various façades of Prague - you name an architectural style and you’ll find a great example of it here - we went for coffee.

Café Ebel is a pleasant, well-run coffee house in a touristic courtyard, Týn Court, I think. It seems to cater mainly for foreigners as its German name should have suggested. But the coffee was great, if a little strong for my tastes (it is in most places outside the UK), and the quiche and soup very tasty.

On the same court is the Hotel (and Café) Metamorphosis. Any cockroaches found there are just past guests, I would assume.

Chasing the trail for a bit longer revealed a few more churches - Pragians used to be very religious before communism took over. Communism doesn’t like people to believe anything except its own tenets. In that respect it’s just like any other religion. 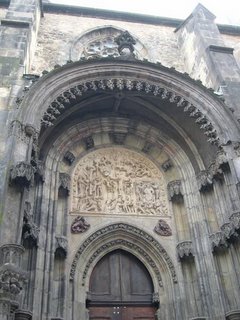 We were just in time to catch one of the must-see tourist attractions of Prague - The Racist Clock, more usually known as the Astronomical Clock. Every hour, Death, the skeleton, rings his bell and a parade of saints marches by open windows. Its racism comes from its depiction of greed as a Jewish moneylender (which has since been altered to look like a drunk, it seems) and pagan invasion as a Turk who appears to be holding a lute.

The clock itself is a mass of dials, arms and even a sun to indicate where the sun is in the sky. For 1490, it’s an amazing piece of technology. And it still works, even if it is a little difficult to see what the time actually is. But that's okay, as the tower also has a regular clock face so you know when the Astronomical Clock will chime. 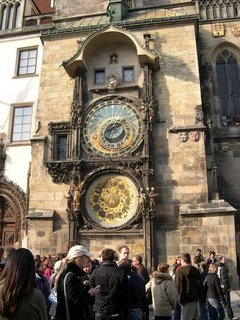 We eventually crossed the Vltava river at the famous Karlov most or Charles Bridge. Every guidebook, every previous visitor, every instinct we had warned us that on this bridge pickpockets operated. We were on our guard and so busy looking for pickpockets and their ilk, that we barely noticed the austere statues that line the bridge. They are all very religious and depict various Christian figures and episodes. There are saints doing saintanic things; Christ bleeding on the cross flanked by a couple of Marys; Saint Goliath carrying the tiny Jesus on a cross to safety. 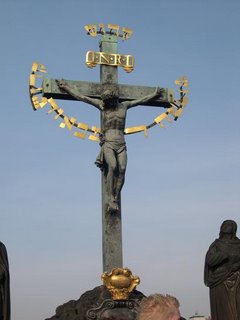 Hanging out with Jesus 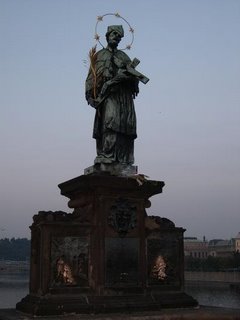 St Goliath carries Jesus away from the stone-throwing Davids

It would be quite disconcerting to have to walk across the bridge twice a day every day. It’s calculated to make anyone feel pious. However, some levity was provided by a man playing jolly tunes on an organ and a marionette playing guitar. And on the way back, a man was playing glasses filled with water making an intriguing, atmospheric soundscape something like an avant-garde film soundtrack. 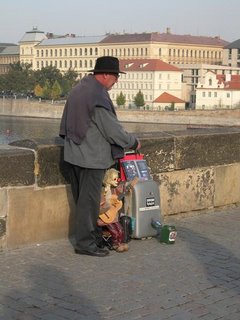