Over the river is Prague Castle or Hradčany or Hardcandy if you look at it quickly. It’s a large, imposing affair on a hill overlooking the city, not unlike the castle in Kafka’s The Castle. It’s big. We didn’t go into any of the buildings, just wandered around the enclosed area.
As all good castles should, this one features its own convent and a toy museum. It also has a huge cathedral in the middle, complete with some of the most disgusting gargoyles protruding from it. Ugly, dog-like creatures some of them, other more human but with vast tongues hanging out. One or two were playing lutes. As has been previously established, the lute is the instrument of the pagans and evil-doers, a little like today’s electric guitar. These ones only needed white face paint to resemble a Kiss concert. 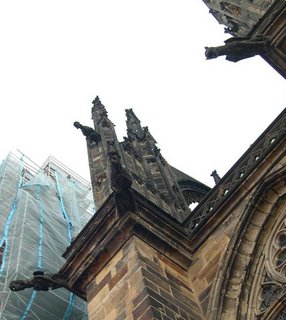 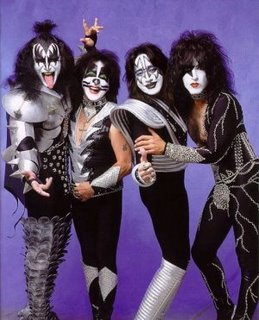 
At the main entrance to the castle are those ceremonial guards that stand still for hours on end and display much more skill at it than those human statues although the public treats them quite differently. Despite the fact the human statues are not trained to kill.

Atop the gates, are some more statues. These depict saints engaged in Extreme Conversions. One holds a club aloft over the head of a sinner, the other is about to stab a second. None of this door-to-door pamphlets for these guys. 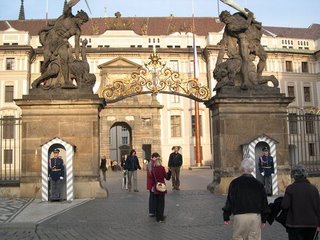 
We wove our way down from the castle in the royal gardens. Built on a steep hill, they are layered and maze-like, connected by narrow steps. Partly restored by HRH Prince Charles (not wuite sure what he did exactly), it is a perfect place for a secret royal assignation. As said to Catherine on one of the secluded benches, this is exactly the sort of place a king would seduce a parlour maid. “Something like that,” she said. “Or perhaps where a queen would seduce a stable boy.” Something like that.

One of the garden areas is definitely in the French style (think of a bonsai Versailles). Here there was a fountain of a man astride a three-headed, water-spouting fish. As you’d expect he was just about to convert one of the heads to Christianity with big fat golden club.

Eight most common things to see in Prague

For dinner we tried a second time to get into last night’s first choice. We failed: again it was full. Popular place. We ended up, after a walk, eating at U Provaznice, a popular (mostly with tourists and ex-pats, I think) bar and restaurant. It translates as “At the Rope-maker’s Wife’s” and relates to the wife of a rope-maker who seems to have opened this or some other pub in order to meet men while her husband was away selling his rope. He came back found her at it and used some of his rope making skills to fashion a noose for her.
They had dark beer on tap, which was nice, and typical meat-heavy Czech dishes.

We shared a table with three jolly Swiss postal workers who made me think Switzerland must be the Canada of the German speaking world, covered as they were with Suisse/Zweis caps and the white cross on the red t-shirt emblem. I think I might start calling it the maple-cross. Or I might not.

After dinner, we caught the chiming of the Racist clock again, but this time in a better position to see the saints go marching by. Did I want to be in that number? Well I was. Saint Peter jerked by carrying a key. 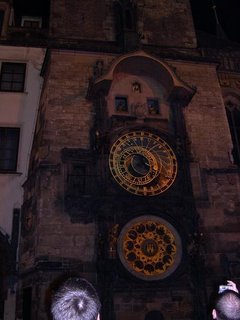 Racist Clock: in action at night


On our further strolls we discovered the whereabouts of the fabled Sex Machines Museum but it was a little close to closing time and a little pricy to see instruments of pleasure that look like instruments of pain as well as all those devices of frustration: chastity belts, etc.

We also bumped into a drunken Irishman. What are the chances of that? He was looking for the fabulous bar of the end of the rainbow, or to be more precise, Harley’s bar, where apparently people eat fire and (according to the poster we saw later) men drink tequila out of the navels of young women. Anything to sell you smaller measures, I’d demand mine from the navel of a fat, old man.
Posted by Peter More at 22:25
Email ThisBlogThis!Share to TwitterShare to FacebookShare to Pinterest
Labels: Anthropology, Art, Drink, Europe, Food, Religion, Travel