When the best-laid men and the best-laid mice compare plans, there is (or was) a thought in certain Highland parts that they can aften ‘gang agley.’ ‘Gang agley’ is mouse for ‘up the skirting board’ and can be compared to the human, ‘going pear-shaped.’ As in the example, “I married a supermodel, but she’s gone pear-shaped.”

The intention was to pop in - on the way to l’aeroporte Gatwique - on old friends of mine and their two kids. Liz and Shaun had independently been two good friends when one day they upped and married each other. Since then they have started producing bright and beautiful babies.

Alas their assumption was that myself and The Lady Catherine would be up at the crack of dawn. And my assumption had been that we would speed through the roads that yesterday we crawled through in the other direction and have enough time to have a cup of tea before we dumped the car back with the rental firm. Naivety on both parts.

In fact, we were lucky to get to the airport before the time they shake their heads at us.

Gatwique - or Wique de la Gat as the French call it - is smaller than the metroports of Schiphol and Heathrow. Yet it too is getting a bit flabby round the waist. Flights to Amsterdam leave from what is politely called Gates 114-119. It’s an outhouse / extension of the main terminal connected by a bridge into which is constantly piped bird song. This is despite the fact birds avoid airports and the plentiful sucking-skinning tubes that adorn most of the planes there. 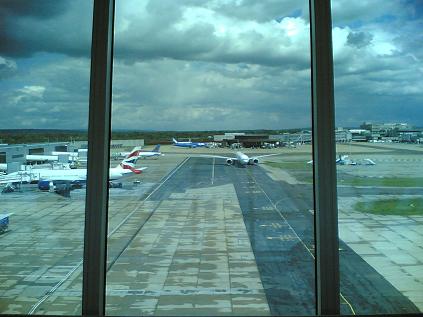 Wasn’t it Rabbi Burns who said, “The best-laid nests of birds aft gang ajet?” Or something like that.
Posted by Peter More at 19:33
Email ThisBlogThis!Share to TwitterShare to FacebookShare to Pinterest
Labels: Travel