Yesterday was the 6th day of the 6th month of the 6th year (of the 3rd millennium). If ever a day was susceptible to the Revelatory implications of what 'Evil' is, this was it.

In one of the religious parts of The Netherlands, one fearful chap prayed from 6pm the previous day to 6pm the day itself. That's 24 hours of non-stop praying. Meanwhile in Germany, according to Dutch newspapers, thousands of people were in fear of their life. Clearly the fear was unfounded, or the 24-hour all-day prayer-a-thon did it's work (and let's face it, if that didn't work, then what hope is there for those of use only form of prayer is a quick, hopeful glance skywards?), because all that passed on that day was that Hollywood released another remade movie.

The fear aspect looks even more ridiculous when you ask yourself, "Does the Devil really use the Gregorian calendar?" The Jews, Moslems and even many Christians say not. In fact, I expect His Unholiness is just as likely to rise up on 7/8/6 or 10/3/7 as on 6/6/6. In fact there's a good chance the date of his uprising is the one indicated in the corner of your screen right now. Better start praying. I recommend at least 24 hours, if you don't want to be responsible for even more Hollywood remakes. 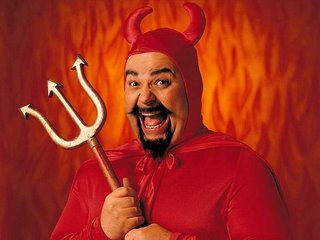 Left: One of the most feared people by members of the Christian faith. See also: Dan Brown.
Posted by Peter More at 11:07
Email ThisBlogThis!Share to TwitterShare to FacebookShare to Pinterest
Labels: Netherlands, Religion