The bi-annual showcase for up-and-coming British bands has had a knack lately for landing on celebratory days. The first one of 2005 landed on Queens Day and the Saturday of the this one was on Museum Night. First time I thought it was bad planning, by the second time I am beginning to suspect it is deliberate. Although I don't yet know the reasoning.

Earlier this year, the line up was lead by bands on the verge of Stardom: Kaiser Chiefs, The Others, Tom Vek. This time all but one band was unknown to me, and that one I had to miss due other commitments on the Friday Night. But then, unknown bands and new discoveries are what this mini-festival is all about.

First up were Field Music, who perhaps could be called Green Pastures. It's a tough spot at the start of an evening and the band. They were nervous and failed to really engage. Perhaps they realised their 1960s guitar pop wasn't quite the thing for there and then.

Next up came Amusement Parks On Fire, who play that kind of processed noise and vocals thing which made every song indecipherable from the last. Kind of Nottingham Sea Power as in the sort band to play 4 songs in a 30 minute set. Very difficult to be engaged by.

The Guillemots play world music with feedback. Elements of Badly Drawn Boy meld with Rod Stewart, Jack, The O-Diddley Social Club and jazz-school musicians everywhere to form an experimental whole. Enjoyable to have dinner to. 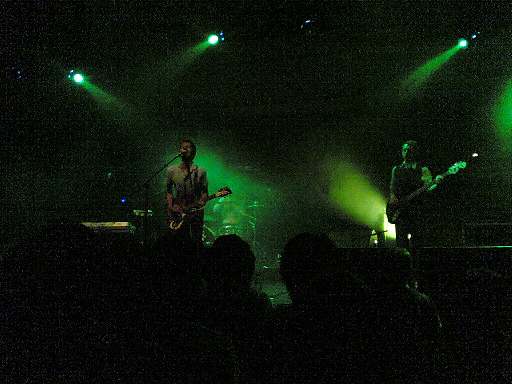 Battle took the main stage next and provided the first band of the evening to really make you go, "ooh." When Hastings Financial Software went bankrupt, four of their hardest working employees went, "what the flip?" They shut down their computers, closed their ledgers and learned instruments to become a great indie rock band.

They are all short and geeky looking; Their bassist sports a tank-top, and not in an ironic way; their drummer made an attempt at being Rock'n'Roll by having no shirt, but it just looked even more geeky given the fact he was bright English pale. Plus he is the only drummer in existence to have NO tattoos. I expect after a bit more success, he may start to get it and get himself a tattoo, but I'm not sure how Rock'n'Roll "Linux" is. It's their look more than anything that makes you surprised how good they are and how much you allowed your prejudices to influence you. Geekophobia is one of the few bigotries the politically correctors have missed. Probably due to their own anti-geekism. And if the electronic music revolution has taught us anything it is the geek is king.

And now what I should have been talking about from the start of the last paragraph: their music. They sound like pop-era cure meeting current-era Editors. Their singer is not someone to half-heartedly mumble a song. He belts it out with a possessed charm. Backed by a band who all believe in each other and never want to go back to writing financial software ever again.

Next advanced ¡Forward Russia! a band who hark back to punk-era Cure (I hadn't realised there was such an era before this) but had their foot firmly in the that nu-old-skool where Maxïmo Park, the Killers, et al, et al dwell. Their energy and commitment were great, and they have it in them to do well. The only thing that put me off or rather did later is the fact their songs just have numbers. Or maybe it's just communist lyrical equality. The other thing that put me off was not their fault. It was the cameraman's obsession with the girl drummer. But thinking back she was possibly the only girl who played that day. What's up with that? Has laddism really taken over back home?

Then came the Dogs who win the prize as probably the most confident band of the evening. The Dogs (probably named after the Isle) are the result of a cloning experiment involving The Jam (probably named after the session) but where the material became contaminated by outside elements, including, bizarrely enough, The Levellers (certainly named after the alliance of civil war revolutionaries). But the Jam influence comes through more than anything, especially in their stage presence. Something that their fellow Jam-imitators, The Futureheads, fall down on. The Dogs were entertaining and played good tunes. And if you're gonna be heavily influence by any band, better it is The Jam and not Simple Minds.

Duels were nothing special. Well, they had a girl on keyboards, I think, but, their pop/new-wave sound seemed a bit dull amongst everything else.

Clor were the last band on the main stage, and as such could be considered the headliner. But clearly it hadn't been programmed that way. They are new-wave / electro-pop and I'm sick of writing new-wave, it happened 20 years ago.

The Test Icicles have the best name of the day, and their live show was a lesson in not coming on stage more stoned than your audience. They are a bit like The Fall or perhaps more accurately The Fallen Down. They shouted a lot and had incoherent gaps between the tunes.

Chiniki were the next surprise band of the evening, and suggested the geek thing is actually a movement. They are new-new-wave with elements of electro and happen to bring in bits from bands as diverse as Placebo, Air and Led Zeppelin. Their lead singer looks like a cross between Freddy Mercury and former Suck front-man, Evan Jones, and gives good shout. Meanwhile, on the bridge of the star-ship Keyboard, their lead-keyboardist plays like Napoleon Dynamite possessed by by lightning. Normally I don't like groups where the keyboards outnumber the band members, but here it actually worked. They had two keyboardists, although one was really a substitute bassist.

The whole band played with huge amounts of gusto and talent. They were enjoyable to watch but did however prove that keyboards, as befitting the geek image, are not cool. No matter how much you play them above your head or jump around with them, they are still keyboards and as such are one tenth of the coolness of guitars. But throwing yourself at them and playing with such intensity your thick-rimmed National Health glasses nearly fly off helps some way to redress the balance.

The final band of the evening came very late on to the proceedings (it over ran by quite a bit). So late that your unpaid reporter, with no editor to satisfy, decided to post an incomplete review due to his own weariness and the desertion of everyone else in his group.

So consequently I have no idea what the Infadels sound like. The program says they sound like the Clash, but then they all do these days, don't they?

To compensate, I will mention two bands that played the previous night, that I had enough report of from more dedicated followers of music to feel able to mention. Queen Adreena, the only band I really knew of before and do like immensely, apparently played a typically intense and overly-arty show. Katie(-Jane Garside) fell out of what is left of her dress and tried to hang herself with the microphone. The dirty guitars, twisted lyrics and little girl vocals is a quite, quite compelling mix. For me anyway.

The other mention goes to Kid Carpet who rocks out - or more accurately punks out - on kids instruments. I for one am sad I missed this. I am looking forward to the other bands in the genre: Sid Vicious-Price, The Intensive Care Bears, Mattelica.
Posted by Peter More at 19:40
Email ThisBlogThis!Share to TwitterShare to FacebookShare to Pinterest
Labels: Music

Slightly edited version is at: BlogCritics.org