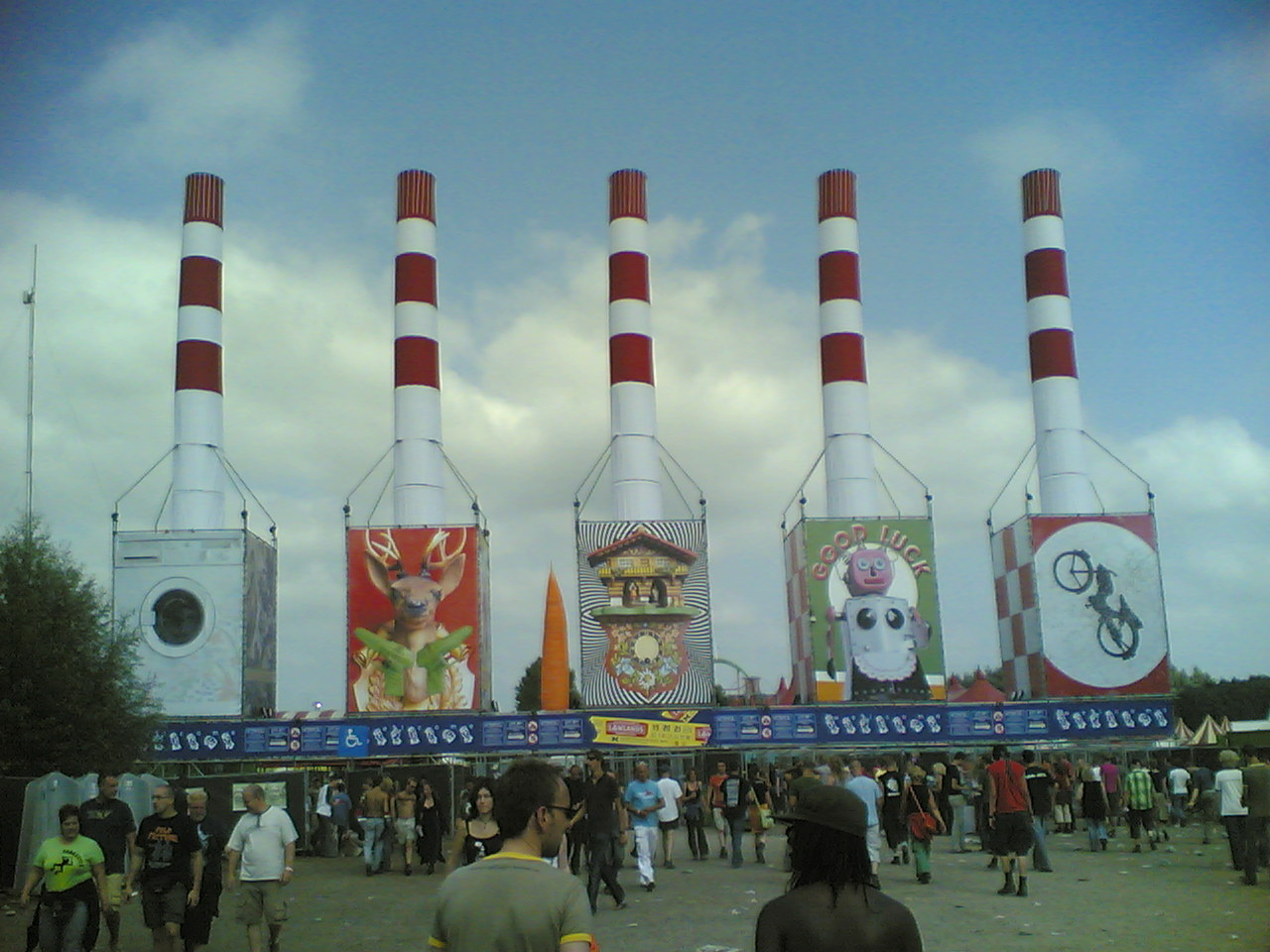 Throughout the weekend, the festival god kept us believing by keeping the sun out for much of the time, but occasionally throwing down a little rain. Not too much, just enough to let us know who was boss, and who could easily ruin the festival if he or she so decided. Saturday morning was hot again to wake up all but the comatosed. Even our small group had a couple of those.

We wandered into the ground early to pick up caffeine and (late) breakfast. We caught a little of pretty-boy Dutch rockers 2nd Place Driver, who were pleasant.

The first music we made after a period back at the tentstead was the end of El Pus. El Pus are crunk (Southern rap/hip hop) with guitars and were lively and requiring of more investigation. A little bit of Zita Swoon accompanied some food, but it wasn’t so long ago that I saw this great dEUS spin-off band at the Paradiso in Amsterdam, plus Death From Above 1979 beckoned. Death From Above 1979 are two seventies homosexuals who beat seven shades of shit out of drums and guitars to make interesting music. Compelling because it’s not often you see a full-on live rock group with own two members. Don’t expect to hum too many of the tunes.

Before the end, after a brief meet up, a very small contingent made their way to see Bad Religion. Bad Religion are one of the greatest bands ever to grace this small planet. Intelligent, tuneful punk with a social conscience. I could go on forever about how good this band is, but I won’t. Just to say that they still rock, performed well and did an interesting version of Generator.

Another brief meet-up to the tunes of The Arcade Fire, who are best described as Interpol. Nine Black Alps who had intrigued at London Calling cancelled at the last minute and were replaced by Art Brut, knowing, mischievous Art Punksters with the difference of being more 60s influence than 70s influenced. Best appreciated intellectually than any other way.

From here, it was time to speed over to the Grolsch tent for The Pixies. This time fully reunited (unlike last time which was only a partial reunion). The Pixies churned out their great old classics and were even enticed back for an encore for an enthusiastic audience. A definite walk down Nostalgia Alleyway.

The next destination was the Alpha tent for today’s headliner, Marilyn Manson. Marilyn’s inspired industrial phase has given over to a more mediocre Goth phase. Even people with their faces Marilyned up were leaving during the middle. He did 4 cover versions, none of which were surprising. In all it was a little disappointing, as I had high hopes for an entertaining show. Perhaps it would have been better if we were IN the tent. And huge fans. And on something.

Much of the night after this was spent enjoying (and later being annoyed by) the kitsch irony of dancing to 90’s dance classics of the kind that used to play in the clubs your friends forced you to go to. But it was nice to end the night chilling and dancing at the same time to the wickedjazzsounds DJs.
Posted by Peter More at 11:02
Email ThisBlogThis!Share to TwitterShare to FacebookShare to Pinterest
Labels: Music