The Sweet Smell of Good Service

I'm going to preface his by stating I am not a shopper. Shopping tires me out. Even walking past shop windows seems to suck energy from me as though shops were made of some sort of Kriptonite (Kooptonite? Copetonite?).

But the act of going into shops is still something one has to face every now and again. Even in these days when pretty much everything is available online. Once the problem of not being able to see up close and feel the products has been solved, we can close all the shops and turn high streets into playing fields. Oh glorious utopian, noshopian future.


In the meantime, I still occasionally find myself swallowed up by a shop. I've gotten worse over the last few years with my shopophobia. Probably due to living in the Netherlands where choice is regarded with suspicion and people believe working in the service industry is beneath them, especially those people who actually work in the service industry, they definitely think working there is beneath them.

Often in the Netherlands, I feel the sales assistant is regarding me as something sullying their store and keeping them from musing about the world and its problems rather than being the reason the shop is there in the first place and the ultimate source of their income. I can't say I felt the UK was hugely different from this. Certainly both places were a long way from the other end of the spectrum, America. In the US, shop assistants regard you as though you are a potential new best friend and fawn over you in a way that outside of the shop environment would require you taking out a restraining order. I often worry that shop people there will start stalking me. But it's just a cultural thing that is magnified in shops. If you want to make sure they're not about to stalk you, do what I like to do. When you turn away to leave, do so slowly but keep them in your field of view. I really enjoy watching shop people dropping their shop faces and putting on big frowns. Especially after I've just decided not to buy something.

In the last few years, the UK has been heading further away from the stereotype of a nation of grumpy shopkeepers and bringing in a lot more of the American concept of service. People eagerly help you and know what they are talking about. I've been in shops where people have radioed to someone in another part of the store to come and help you.

The other thing in the UK which has improved but was always way above the Netherlands is choice. It's gotten better in the Netherlands. It used to be there'd be at most 3 types of anything. But mostly one. When I arrived there were only 3 possible flavours of crisps: Natural (slightly salty), Salted (very salty) and Paprika (salty and peppery). Now there are sometimes as many as 10 varieties in a big supermarket.

But in the UK, it's actually going too far. In some areas it's as bad as the US. In a big US supermarket, the choice for certain items (such as popcorn, breakfast cereal, assault rifles) is horrendous. Every single variant of topping, filling, salt content, sugar content, cheese content, vitamin content, heating method, and sports-team affiliation is available for the shopper who has any idea of what works for them. Those who don't, have a lot of experimentation before they find what does. 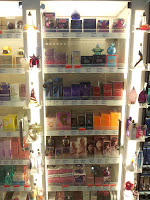 One department that has always had a crazy amount of choice which has recently gone up to levels that are officially insane loopy not right in the head is cosmetics. The numbers have shot up because nowadays anyone who is anyone in the pop world has also brought out their own line of cosmetics. Who would have though that Rhianna, as well as all her wildchild and pop credentials is also a fully qualified olfactologist.

Britney Spears, Beyouncé, Lady Gaga, Rhianna Bean, Plink, Nikki Minge, Kylie Minge, Christina Watersports, Justin Bieber -- all of the big girls of pop -- all have their own line of perfumes. It's shocking how widespread it is. I don't hold any of these ladies responsible for this. They are free to try and cash in on their product status. What I find shocking is that people buy them. People think, "screw Chanel and Lorry-L and their laboratories of highly qualified, French scientists and scores of years of research and experience, let's get some old muck based on the say so of someone with Britney Spears' business sense." 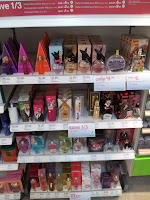 We've sort of already dipped into the children's market with mention of the Justin Bieber range. After all, anyone over 15 wearing Justin Bieber's Girlfriend should be reported to someone.

But it doesn't end there at all. Disney has a range of perfumes for children endorsed by such 2-dimensional celebrities as Snow White, Cinderella, and the Little Mermaid. I don't even want to talk about how awful the idea of marketing perfume to children is. I just think do you really want perfumes endorsed by people who don't really exist? And if they did exist, what sort of people are these? One lives in a tiny house with 7 miners; one is famous for wearing rags and the third is 50% tuna.

There is even a Betty Boop perfume for children aged 107.

For the men there's of course Playboy (also available for women). What woman could resist a perfume chosen by an 87-year-old pornographer? But my favourite is this one...


The Marvel Comics eau de toilette. This really blows my mind. There seems so much wrong with it. Whoever thought, "Oh the Hulk, I bet he smells nice." No. If you think about it, how disgusting do you think the hulk would smell close up? The Hulk is basically a superhuman, green wrestler.

But maybe that's the point. Superheroes sweat a lot and most do so in latex, heavy armour and with their underwear outside their leggings. So if any group of people are in need of perfume it would be superheroes. But which is the group of men least likely to wear perfume? Superheroes. Okay, Miners, truck drivers and then superheroes.

I think my main problem with this is if you want a product to help you get the girls, Marvel isn't going to be the manufacturer of choice. But then if you're after finding a good man to treat you right, you probably shouldn't be going to Rhianna for help.

Posted by Peter More at 22:52
Email ThisBlogThis!Share to TwitterShare to FacebookShare to Pinterest
Labels: Americas, Anthropology, Me, Netherlands, Sex, Shopping, Travel, UK, US