I've just finished rewatching Forbidden Planet, a big-budget sci-fi adventure movie from 1956. It’s a bit of a departure for me because my favourite genre is in fact low-budget sci-fi adventure movies from that era. But there are plenty of reasons to watch this movie even though it is dated. In fact it being dated is tied up in nearly all of the reasons to watch it. It’s a very 1950s view of the future. I’m so used to watching movies from that era with terrible or no special effects that it’s always surprising to see one from that era with pretty darn good special effects. For the time. 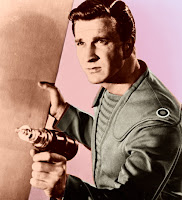 Actually, despite the things that clearly date it, it is a good, well told story. No doubt due in part to it being penned by one William Shakespeare. And the story in this futuristic setting remains very plausible, even though the 1950s realisation of it is very much fixed in the 1950s. In this respect, this is not a movie to watch to see 150 years into the future, but to see 50 years into the past.
Posted by Peter More at 10:00
Email ThisBlogThis!Share to TwitterShare to FacebookShare to Pinterest
Labels: Anthropology, Fiction, History, Movies, Review, Science