July the 1st is Keti Koti. Maybe you knew this, but I didn’t until last year. Keti Koti is the Surinamese day of emancipation. In Amsterdam it is celebrated with a festival in the park near me. I presume it’s a lot bigger in Suriname.

Keti Koti means something like “chain cutting” and celebrates the day that slavery was officially abolished. At least that’s what gives it the date. What people are actually celebrating is the slaves being freed. Now in your naivety, you might be thinking, as I once did, “surely the day these things are declared is the day they happen.” *pats self on head.* 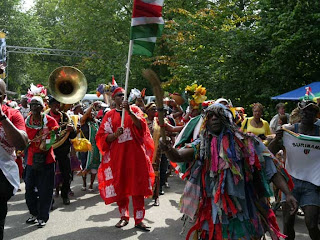 In the US a big day of celebration is Juneteenth (June 19th). This celebrates not the actual day that slavery was declared to be abolished and not the date it was enacted as a law, but it celebrates the day the slaves in Texas were told about the abolition.

Abraham Lincoln declared slavery illegal on September 22, 1862, but the law only came into effect on January 1, 1863, which itself seems a long time to wait. But it was only after military action two and a half years later this got announced to the citizens of Texas.

In Suriname (a Dutch colony), slavery was abolished also in 1863 (on July 1st), but it would take ten years for it to come into full effect. Ten years! That’s a crazy long time. It was hailed as a ‘transition period’ which seems a very Dutch response to a problem. Namely, “We’re going to ban slavery but tolerate it.”

It’s no wonder people want to celebrate it finally coming about. Even 140 years later, in a cold, wet land far, far away.


http://www.ketikotiamsterdam.nl/index.html
Posted by Peter More at 17:37
Email ThisBlogThis!Share to TwitterShare to FacebookShare to Pinterest
Labels: Americas, History, Netherlands, US