On Monday night Daniel Kitson performed his latest show to an audience of mostly awed admirers. It certainly included a significant proportion of the Amsterdam stand-up community. 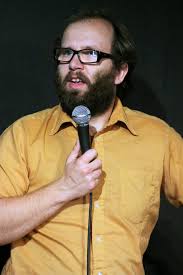 Daniel Kitson is one of those comedians who are talked about in hushed tones. He’s practically a secret due to his studied avoidance of the limelight. He has refused to do TV, doesn’t put much out there on the interweb, and doesn’t do social media. Unlike most comics, youtube isn’t flooded with clips of him. In fact what is out there doesn’t do him justice.

I first saw Daniel Kitson when we were both starting out on our comedy paths. It was at a try-out night in Brixton, South London, I believe. (I mean I believe the gig was in Brixton; I know Brixton is in South London).

He was the first to arrive and I was the second. He looked like he was 17. And may well have been, I don’t have a date for this story. He looked like the nerdiest kid on the block. The kid the kids the bullies beat up beat up. He had glasses so thick it looked like he’d taped magnifying glasses together. And when he spoke, he had one of the worst stutters I’d ever heard.

My thoughts, and I’m so ashamed to type them out loud, were, “You are going to die out there.”

Off stage, back then, pre-gig, this was Daniel Kitson as I knew him in the few minutes I knew him.

On stage he did the very opposite of die. He killed it. He was intensely funny, had a nerdy, shambolic stage persona, that was somehow in control; his poor eyesight was the genesis of a very funny bit about it as a disability; and he did not stutter one bit.

Sometime later, he won the Perrier award (as it was called then), Britain’s most prestigious comedy prize. His Edinburgh show the next year was not stand-up. He refused to cash in on being a prize-winning stand-up (even though it undoubtedly help the shows sell out) and told a story. An entertaining, odd and funny story, but not a story you would expect from a stand-up.

As a performer, he is perceptive, sharp and seems to have an impeccable sense of what’s funny. And he’s clever. And he doesn’t mind that cleverness showing. Many comics hide their cleverness to increase their mass appeal. As Daniel hasn’t gone that route, he is free to be as clever as he likes. This as much as anything makes him a comedian comedians love.

His current show is an hour-and-a-half monologue with its own soundtrack about how faulty human memory is and how we can never really know ourselves. Obviously topics you can write long, dry philosophical textbooks about this, but to create an hour-and-a-half of comedy is definitely a challenge. Daniel likes to challenge himself.

The result is far from dry. It’s an impassioned plea to remind us of human failings we all too eagerly ignore – because basically we are much happier and confident when we think we know who we are and what’s going on. An impassioned, strongly-argued plea, interwoven with sublimely funny examples and incisive observations of us the predominant species on this here planet.

I thoroughly recommend that if you ever get the chance to go see him, do. But not every single one of you interwebbers, we don’t want him to lose his “secret” status.
Posted by Peter More at 07:15
Email ThisBlogThis!Share to TwitterShare to FacebookShare to Pinterest
Labels: Anthropology, Comedy, History, Me, Philosophy, Review, Stand-up, Theatre