Out of the Book Closet

The Newspaper today reported two things entirely separately without making any reference to their being linked.

1) Saturday was the Gay Parade along Amsterdam's Prinzengracht. This as avid readers will know is one of Amsterdam's most colourful spectacles - a huge carnival-like procession of brightly-decorated boats manned and wimminned by some of the most eager-to-dance crews to ever sail the seven canals. The headline concerned itself with the fact that there were about 100,000 less spectators than last year.

2) Sunday was the annual book market in Deventer, possibly the biggest one in Europe or even the world, but certainly in the Netherlands. This year there was a record number of visitors, 130,000 to be approximate.

To my mind, it seems that 100,000 people decided not to go and watch the amphibian fun and frolics of the Amsterdam gay community, but instead went to look at a lot of dusty old books. Is this an indication that the world is becoming less sexually-orientated

and more bookish? Should next year’s Gay Parade be called off and replaced by a Lesbian and Gay Book Faire? In ten years will sex be replaced by a “Golly good read”?

We’ll just have to wait and see. I’m reading what seems to be the world’s second longest book, which I guess would be tantamount to tantric sex. However, next year I will still go to the Gay Parade and not Holland’s biggest Book Market, but it sounds like I might be on my own. But then, I'll still have Ulysses to finish. 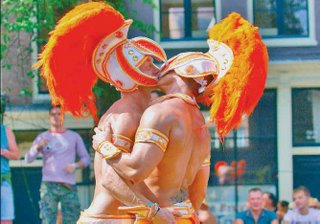 The Original Hollywood Ending of Gladiator OR "I'm Spartacus!" "Me too, that's awesome!" 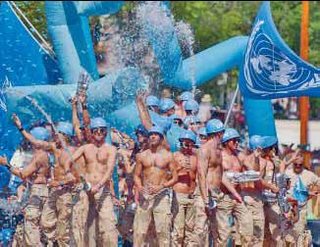 The UN Piece-keeping Force
Posted by Peter More at 19:37
Email ThisBlogThis!Share to TwitterShare to FacebookShare to Pinterest
Labels: Books, Netherlands