Lowlands is a strange world where the local currency is based on the price of a beer. Like venues such as the Heineken Music Hall (in Amsterdam) you cannot pay with cash or PIN, you need to pay for tokens (with cash or PIN) and then use this to buy things. This of course is a scam and often touted as to prevent theft, although it’s not clear how. The plastic chips are generally easier to loose than cash - in particular notes and thus not spend or redeem. Plus as it’s a foreign currency; you have that same holiday thing where the money doesn’t seem completely real so to some degree you don’t think as much about the cost of things.

This year through inflation of 5% in the country of Lowlands, or perhaps due to a strengthening of the Euro against the Lowlands Token, one token now costs 2.10 Euros. One beer as ever costs one token, and everything else is calculated as a multiple or multiple and a half of this. It seems that drinking is what determines the local economy, and actually this is not far from the truth. 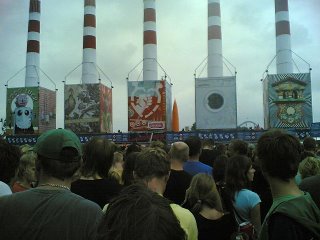 Lowlands is the perfect place to familiarise yourself with the backs of people’s heads.

On arrival at the entrance to the main area, there was of course the obligatory queuing, but it was relatively quick moving. If you compare the above with last year’s picture, you’ll see they went to the expense to rearrange some of the pictures.

Lowlands seems to like to open with a bang and this year one of the first bands was Wolfmother. Take Led Zepplin and Black Sabbath, feed them a few tinnies and you’ll get Wolfmother, Australia’s homage to 70s hard rock. I sent one of my cub reporters there and she spent the rest of the festival shouting “Wolfmother!” at every opportunity, even to other bands.

We caught a few minutes of Mews, I mean Mew, who are a bit like Muse with a chunk of Keane thrown in, before heading over to catch some Matisyahu. Matisyahu is Hasid (rock) reggae. It was well done to an enthusiastic crowd although I was very disappointed he never said “Jarweh” or something like that the entire time I was watching. Others in the Hasid Reggae genre are: Shabbat Ranks, Job Marley and, er, Israel Vibration. Golan Heights are not actually part of this scene; they were sequestered by the genre. 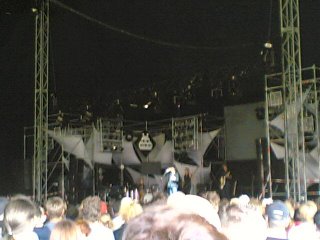 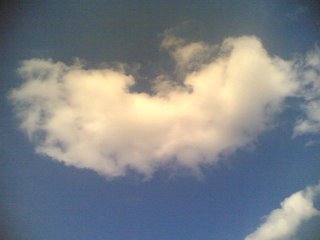 A lowlands cloud. (If you squint very hard, you can make out The Boomtown Rats.)

The Dead Specials, I mean 60s, were enjoyable with their take on ska. Always nice to be reminded of The Specials, The Clash and all that. 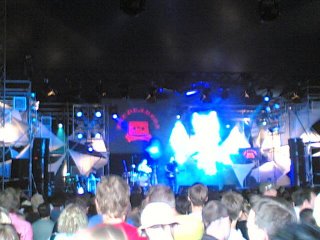 After this, there was some more wandering. On the way, we passed:
- Blue Grass Boogiemen who do exactly as it says on the label. Are they from Alabama? Arkansas? You ask. No Utrecht! So I guess it should be pronounced bogiemen.
- Opgezwolle, Dutch Hiphop (or nederhop) pioneers. Seems that everyone copies them pretty faithfully.


The Veils were next. They invoke a simplified Cure and have that penchant for slow ballads that Coldplay and Keane have rejuvenated, Although they are a few degrees jollier.

Bloc Party were a treat. It has taken me a while to warm to them, but with time and then with this confident performance, I am now quite enamoured. It’s fair to say they are aware of the Wedding Present, but aren’t we all. 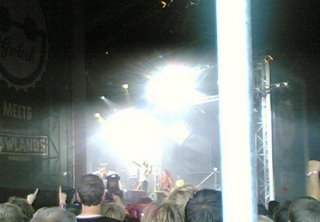 The next band we literally strolled by were Gorefest. This is a great name: You know what you are getting. No one goes to see Gorefest wondering if they’re going to be like the Carpenters. Unless you are thinking of the kind of carpenters who work with human flesh rather than wood.
Our wandering then took us to the tent currently occupied by DJ Shadow. DJ Shadow outputs a cacophony. A diverse yet well matched cacophony with things such as sped-up samples of Arctic Monkeys, sped-up samples of scratches and sped up samples of people singing. I guess we caught the up-tempo part of the set.

And then there was Placebo. I saw Placebo many years ago, when they were on their way up. I went to see one of the support acts, Strangelove, who had a fair gig, but everyone had to admit Placebo rocked the joint. Now they have even more great songs to fill a show with. The weather was still pleasant and so we could watch the majority of the show from the banks on the side of the Alpha tent, which was a great way to end the gig portion of the day.

This shot of Placebo live is actually up for a rock journalism photography award and is one of two shots shortlisted to be the next cover of Rolling Stone magazine.

Me and Catherine.
After the bands have packed up and gone home or to sleep in their diamond-encrusted caravans, most of the venues start punmping out music to various themes. The one that took our fancy was entitled “Never Mind the British.” The night touched on punk, new-wave, Brit-pop, Merseybeat and glam rock as well as many others. The evening bubbled along, veering from genre to genre; occasionally hitting dodgy ground but at least bearable until You’ll Never Walk Alone came on and many of us decided to go home. I can understand now why the song is called You’ll Never Walk Alone, because everyone leaves at the same time.
Posted by Peter More at 20:12
Email ThisBlogThis!Share to TwitterShare to FacebookShare to Pinterest
Labels: Drink, Music