Brussels isn’t really that far from Amsterdam. It’s an hour and a half on the fast train, and 3 hours on the cheap one which seems to stop at every farm on the way. In fact if a cow stands still near to the track, the train slows down in case it has a ticket.

Thalys is the service which runs the fast train. It’s French, so the ‘h’ is only hinted at or mimed and so it sounds like Talece, who I am sure was a character on Game of Thrones. The logo seems to be deliberately sphynx-like. 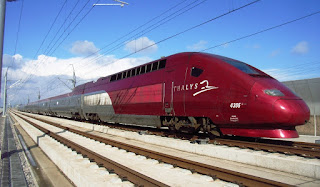 Thalys seems to massively oversell its tickets so much so that you can pay all that extra cash for the fast train and end up with no where to sit. The only warning you get about this is after they have taken your money. They add matter-of-factly, "oh, by the way you don't have a seat. Bummer." (I'm paraphrasing.) And I wasn’t alone. The train was full of people with refugee status. People who have to move on every time someone appears with a ticket for the seat they are in. They are made to feel like third class citizens in a second class carriage.

Why they have to be so duplicitous about it I don't know. Tell me before hand, maybe offer refugee tickets for a much cheaper price. But don't charge me full whack and do the internet equivalent of muttering under their breath.

It makes me wonder what sort of people ride the Thalys. Well, the answer is short people. The seats on Thalys trains all have foot rests in front of them, attached to the back of the chairs. Down, they reach half-way to the floor, and so are of no use to anyone over 4 foot. This would be fine, because the leg rest folds up out of the way. Except that it doesn’t fold up out of the way, it folds up but sticks out. It’s not in the way for short people, but tall people, such as myself, will have the this thing digging in their upper shins for 90 minutes. Or they can put it down and put their feet on it, but then have their knees in their face.

I don’t know who Talece was in Game of Thrones, but she is almost certainly a dwarf, hobbit or orc and, statistically, she was definitely killed of at least a season ago.