Going, Going, Gone to the Chapel

So I tied the knot. Got hitched. Clasped on the old ball and chain. Said goodbye to the single life. Threw away the little, black book. In short, I got married.

Many friends who have known me a long time have mentioned things I may have said some time in the past to the effect that in no way would I ever tie the knot, get hitched, etc. Well, I probably said something similar about Motown and muesli. It's fair to say some of my views have mellowed.

Our original plan was to tie the knot in a simple, cheap ceremony with only a couple of witnesses and a member of the local council trained in performing the relevant ceremony. But the best-laid plans o' well-laid mice often go quite agley. But ours went agley in the best possible way.

Firstly, you should know the Dutch allow keen but poor people to get hitched free of charge. Albeit on a Wednesday morning at 9 am and in the offices of the local council. You don't quite have to take a number and queue, but it isn't, on the surface, much more romantic.

Secondly, my parent's decided they would like to be there to finally absolve their responsibility for me. This meant the whole organisation needed stepping up a bit. Catherine spent a long time finding a dress that was suitable yet multipurpose and in her size; and I had to iron a shirt. 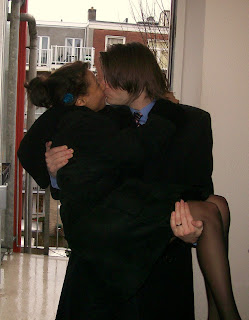 So, we had a small, efficient ceremony, attended by 4 witnesses, my parents and our official filmmaker. The registrar (or woman from the council) kindly did the whole thing in English so my parent's could follow and we could say, "I do." The Dutch equivalent is "Ja," which has the disadvantage of being such an everyday expression that it's hard to say with any true meaning. I have heard a "Ja" delivered with crippling sarcasm, but not during a wedding ceremony.

After the ceremony, we reconvened at our flat to celebrate with the cats and then threw the house open to a select few of our friends. Selected until we knew the house would be full, rather than to include everyone we would have liked, which would have filled most of the flats in the building.

We stopped inviting people not because we ran out of people we liked sufficiently, but because we realised we had reached the limits of our flat. But those we could invite and who could make it filled our place and made the whole day something much more special than we had ever planned. Seriously, you want to find out how awesome your friends are, get married.

Our flat thronged with friends, neighbours and their kids. In fact I'm sure the flat has never had so many children in it. I counted 7. They outnumbered the cats, and so it was apt that on the day when I did the thing I said I never would do, the things I said I'd never own and the things I said I'd never produce would square up and fight for territory. The cats, of course, won, because the cat's owners didn't have to leave.

After a few hours of fun, conversation, good company, bubbly alcohol and a splendid cake, the bride and groom were alone (apart from the cats) and performed their first act as a married couple. They went to Blokker to buy household wares. Who says I'm a changed man?
Posted by Peter More at 20:05
Email ThisBlogThis!Share to TwitterShare to FacebookShare to Pinterest
Labels: Cats, Children, Europe, Food, Language, Love, Netherlands, Shopping