The common wisdom is that pets calm you down. People are always throwing pat phrases at me to that effect. Or they throw the scientific equivalent of pat phrases at me, statistics. I don't deny that the majority of people who have pets are calmed by their presence, charmed by their actions and generally enraptured by the fact that this little furry bundle loves them like they were its own little mummikins.

However, statistics is a two way street. As readers of British tabloids know (although the papers themselves do not seem to) for every study showing X is bad for you it is only a matter of time before a study appears showing that X is good for you. (It's called Dacre's Mirror in newspaper circles, I believe.) Thus I am sure I can dig up statistics demonstrating the following:

People in a state somewhat akin to sleep, when greeted every morning by constant, bad-tempered whines and attempts to block their every step by something fat demanding to be made even fatter, find their levels of calm are shown to drop sharply. 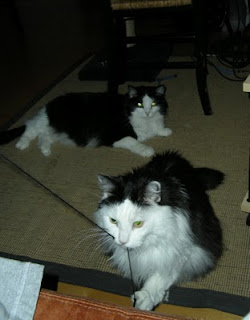 I'm not saying that I never find the cats charming, or even on occasion (when it's their wish to be stroked) calming. (Although it is patently clear their love is at best that which you might have for an occasionally conscientious servant.) But for me the key moment of every day is when I awake. The hopes of the whole day are forming in my clouded mind. The whole mood and outlook of the next segment of daylight is created by the first few events between emerging from the sanctity of bed to that first taste of the brew of life. Were I to be wafted from my bedroom, held aloft by a set of adoring felines and carried to my study and a waiting mug of steaming coffee, then the cats could be said to have a truly calming effect.

But instead I get a chorus of ill-tempered mews berating me for spending all those hours sleeping when I should have been shovelling chicken-flavoured globules in their beaks. I get petulant demands to head down and replenish their bowls with poultry-based kibbles whilst at the same time, the same cats stand directly in front of my feet making any serious attempt to head anywhere almost impossible. It makes me wonder if they are simply without concept of cause and effect or whether they are deliberately out to annoy me.

Somehow they don't seem to mind that their breakfast is thrown in their bowls in the most begrudging fashion. And I shouldn't be so begrudging, really. Because that moment after the food is down and the coffee machine is preparing to do it's Jesus trick of turning water and a bag into coffee – when the only sounds are a few late morning birds asking around where the worms are, the gentle rumble of the Jesus machine warming up and the restful "nom nom" of God's creatures stuffing their furry faces – that moment is the calmest point of the day. Thank you for making me appreciate it, cats. Thank you. Who loves their daddikins?
Posted by Peter More at 10:44
Email ThisBlogThis!Share to TwitterShare to FacebookShare to Pinterest
Labels: Cats, Me, Science, Wildlife