Saturday late morning, we arrived in Paris having had a very pleasant journey. We were fed and able to read, write and perform complex arithmetic. The reason we had decided last minute to wobble off to Paris was that Cath had relatives holidaying there. I'd met them the first time I went to Texas. They live in a huge house and their two kids have the whole basement as their play area. I'm seldom jealous of kids these days, but in this case I made an exception. We checked into our hotel and then soon arranged to meet them.

They were staying reasonably close by, but when you have kids, you don't just pop places, every trip is an exercise in logistics. Cath and I being unencumbered with offspring had just jumped on a train to have a mere 24 hours in Paris. Had we had kids, we would have had to tied them down so that they couldn't fall off things; and make sure there was enough food in their bowls.

We met them at the Bastille and immediately went to eat. Kids need a constant supply of food because as soon as they stop eating they start running around and burning it all up. We found a nicely placed but somewhat touristy café on the side of the square (which is actually more of a roundabout). A constant supply of ham sandwiches came in and various kids and adults had bits of them.

On the island at the centre of the traffic, a stage was being erected. This is because Monday was Bastille Day, when France celebrates the storming of the prison once held in the roundabout in front of us and the freeing of prisoners because they weren't rich. It's a great day to be in France, except we were leaving on Sunday.

Upon leaving the café, the traffic was stopped. Not for us, but because a large precession of people was coming down the street. Not anything to do with the Bastille, but as a protest against nuclear weapons and nuclear things in general, pretty much as all those years ago, gangs of people had marched by the very spot holding up placards stating "Ban The Guillotine," and "No Weapons of Mass Decapitation." 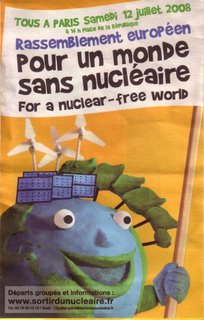 We had been given one recommendation by Claire the super-helpful, French girl from work, and that was the Promenade Planté. It's a raised walkway lined with flowers, bushes and the occasional pond. It's amazingly peaceful for aomewhere in such a big city. It was also a place the kids could run around and be relatively safe, apart from the risk of annoying a few Parisians.

After the walk to and along the Promenade Planté, it was time to refuel the kids. Nearby was a chain of Child-friendly cafes called Hippopotamus. In the end we only had a few Oranginas as time was pressing on. We had a date that evening with Alicia Keyes. Yes, Alicia Keyes. It hadn't been a plan to come all the way to Paris to see this wholesome, young arranbeer, but that's what happened. Or rather, what happened was that our kind hosts were already going to see her and bought us tickets.

The venue is a huge arena-style venue, and was packed to the rafters with enthusiastic French youth. The crowd was got into the mood by one of the Marleys. Old Bob stirred it up with quite a few little darlings and there are Marleys for every day of a fortnight. This one was Stephen and he certainly had his daddy's moves and voice. He had quite a lot of his songs, as well. And why shouldn't he? They'd otherwise only go to waste. Also running around the stage was a little kid waving the Jamaican flag for all he was worth. He seemed a natural on stage and was quite possibly a mini-Marley. It's comforting to know the world will never run out of Marleys.

Before the main act, there was a short film somewhere between the Blues Brothers and wholesome Disney comedy. It's purpose was to show that Alicia wasn't just another off-the-shelf R'n'B singer; She was on a mission, possibly from God. The video also plugged her charity, which does put her above most singers.

After the film came the girl herself with a show that had a lot of pizzaz in the modern R'n'B style. In fact the show often resembled a music video it was so slick and well-choreographed. From time-to-time one of Alicia's pianos popped up or in and she played along. Half way through, she declared that all she wanted to do was play her piano. This she did for three songs then it was back to the pizzaz.

We slipped out early to avoid the rush; waited for a taxi; and then went to a nearby hotel to have them call for one. As we were 6 people they had to call a people carrier, and for that they said they needed to collect 5 euros. It was clearly some rip-off she had just made up, but we were in no position to know that for sure and so handed over the cash. It must be quite sad to spend your day finding petty ways to con people out of piddling bits of money. We headed back to the area of the hotels. It was time for a late-night steak with onion soup. And to introduce the kids to snails.
Posted by Peter More at 14:36
Email ThisBlogThis!Share to TwitterShare to FacebookShare to Pinterest
Labels: Anthropology, Europe, Food, France, History, Music, Politics, Transport, Travel, US