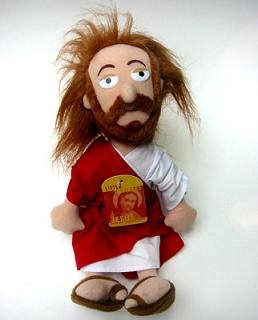 Now for those of us who know full well that Jesus was an enigmatic, errant rabbi whose story got blown all out of proportion (not to mention superimposed over other, earlier stories) should be heartened by the apparent discovery of Jesus' family tomb. However, I'm somewhat sceptical. "What's new?" you say.

The chance of finding one specific family tomb out of the many, many that must have existed seems unlikely. Even my limited knowledge of the times makes me realise that there were hardly any names back then (partly because vowels had not been invented). Half the girls were called Mary, for instance. So I do not buy into the uniqueness of the collection of names argument which states, 'what is the chance that any other Mary, Mary, Jesus and Josephs were all buried together?' It's a bit like unearthing the tomb of Sharon, Darren and Kev in Ancient Essex.

I haven't yet worked out what the "DNA" argument is for it being Jesus, et al. Who would you compare Jesus' DNA with to prove it was Jesus? I guess Princess Diana, if you follow that path. Again, I think that is just wishful thinking. However if the body WAS Jesus, then we should be examining very closely the DNA right now because 50% of it is God's! This means that if this was Jesus, we could use cloning techniques to create a genetically-modified semi-Deity. (Assuming nobody had any ethical objections to this.)

James Cameron is also an unlikely theo-archaeologist. Although he does have some credentials. He has filmed in the formerly lost tomb, The Titanic, and shares some credit for discovering the cursed artefact of Leonardo Di Crapio. And I am sure the description of Armageddon in the Bible was not unlike Terminator 3. He even filmed an undersea convent drama, The Abbess.

As for whether this is the tomb of Jesus and his family, a) we'll almost certainly never know for sure; b) plenty will fervently believe this no matter where the evidence goes because they want it to be so; and c) even more will always deny it because their belief structure won't allow it to be so.

If this really was Jesus and we were tampering with his body and tearing apart his religion, wouldn't he'd be turning in his grave? Obviously he's not; he's lying out on some archaeologist's slab and absolutely not turning as we would have heard about it by now.

So not much good can come out of this, I say, as the yea-sayers can never be proved right, and so have nothing really to use against the religious, and the deniers would not be swayed by any scientific evidence anyway. In fact, there really is only one thing left worth doing:

One morning, before the scientists clock in, the body should be removed. On the slab we should sit a 30-year-old, bearded, middle-eastern man in white robes who will smile benevolent at everyone who comes in the room. After a while, he should get up and say something profound yet mysterious (like "Mr Peter More dot com") and walk out. Religion has its place, science is very, very useful, but nothing, and I mean nothing, beats a good prank.
Posted by Peter More at 22:14
Email ThisBlogThis!Share to TwitterShare to FacebookShare to Pinterest
Labels: History, Movies, Religion