I read in the paper today [6/10/05] that running was never so popular as now. I can well believe it. Back in the UK, I heard that there were such people as those who ran for pleasure or some notion that stinking and being short of breath was healthy, but did not know any. When I arrived here some 4 years ago, I met one girl who did this. Right now it seems that every other person I know is planning to run in one of the many long distance races here. Distances range from 10 km to the forthcoming Amsterdam Marathon. 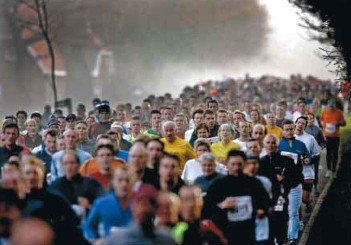 Marathons are 42.195 km or 26 miles 385 yards or 22525.7 Fathoms. They are named after the city in Greece where the Athenians beat the Persians in 490 BC, from which news was carried by a messanger who ran all the way. People think this is such a great story, except they forget the rest. The legend also states the runner fell dead on arrival.

This year I will not be running in the Amsterdam Marathon, but cheering on my friends who are, and hoping they don't have anything important to tell me when they are finished.
Posted by Peter More at 19:36
Email ThisBlogThis!Share to TwitterShare to FacebookShare to Pinterest
Labels: History